It was open season on gay men in The Netherlands this past weekend. Our Dutch correspondent H. Numan sends this report on the culture-enriching antics of high-spirited “youths” in Arnhem and Eindhoven.

Over the weekend two gay men were savagely beaten by a gang of resident mohammedans in Arnhem. Moroccan juveniles, euphemistically described as ‘young men’. We don’t want to accidentally incriminate mohammedans, do we? In that case, they have to complain to google.nl. I did a search on ‘Moroccans savaged gays’ in Dutch, giving me 69,600 results in 1.01 seconds. Clearly Google is not politically correct. Something has to be done here.

What happened this time? Jasper Vernes and Ronnie Sewratan went out for the evening on Saturday night in Arnhem. They are married. Normally they don’t walk hand in hand, but it was late in the evening or early in the morning. They had downed a few glasses and thought ‘what the heck’. So they did. Bad decision. Toto is not in Kansas Marrakesh anymore. Toto lives on welfare in Holland.

Near the Nelson Mandela Bridge (what’s in a name, said the great bard) a gang of eight Moroccan juveniles saw the couple walking hand in hand and immediately verbally abused them. ‘Filthy faggots’ was one of the eloquent phrases in their extensive vocabulary. You can say what you want about Moroccan illiteracy, but they are 100% fluent in Dutch and Moroccan slang. Spoken only, of course. The Moroccans then told them to clear off. As they didn’t, they were immediately jumped by the gang and severely beaten. One of the boys used a bolt cutter he just happened to be carrying around and smashed the Ronnie’s face in. He lost five teeth. Both victims suffered severe contusions and needed medical treatment.

Two boys, aged 14 and 16, were arrested shortly afterwards. Four others reported themselves to the police, and two more are still on the run. Their ages vary from 14 to 20 years.

That’s the first news item. Since this became national news, it’s been all over the media on every page, and we get the usual politically correct response. People place a silly sad cartoon to show their respect on Facebook. Politicians weep crocodilian tears. Alexander Pechtold, leader of D66 went even as far as to walk hand-in-hand with his no. 2 Wouter Koolmees on the (heavily guarded) Binnenhof. So there was zero risk for him, but it’s a great photo shoot, of course. I’d like to see him do the same in a more integrated part of The Hague, in the Schilderswijk or Hollands Spoor, for example. Accompanied by a single policeman. Not the riot police. That would be a lot more protection than ordinary Dutchmen have. 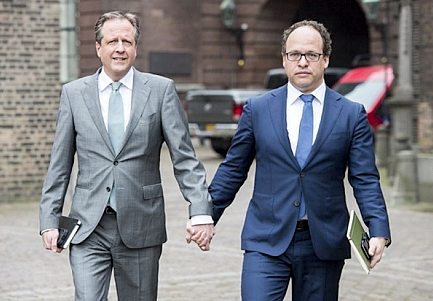 The Nelson Mandela bridge is appropriately lit up in rainbow colors. No doubt a few silent protest marches will be held, maybe a bed of flowers next to the bridge. That’s part of the politically correct religious ceremony. And — you never guessed it — here’s item two:

The arrested boys filed complaints with the police. They were provoked by those highly aggressive gays. They had to defend themselves. Of course they didn’t use a bolt cutter. It’s quite common for fourteen-year-old boys to carry one in their pockets. Or to roam the streets in the dead of the night. Doesn’t every teenage boy do that? They simply punched out five teeth with their fists in an act of pure self defense. They, an innocent group of eight, were aggressively attacked by two men of 32 and 35. They feel abused and slandered by the wild accusations of those damn fagg— pardon my Moroccan, those highly offensive and above all extremely dangerous Dutch men.

We’re not done yet. Actually we are, because this one didn’t get to the front page. Therefore it never really happened. Here’s item no. 3 for you.

In Eindhoven another gay couple was beaten on the same weekend.

Google showed much more tolerance for the religion of peace here: a search on ‘Moroccans attack gays Eindhoven’ gave me just 28,300 results in 0.8 seconds. Eindhoven knows how to integrate cultures!

As Arnhem couldn’t be kept under wraps, the suspects are still in custody. Not so in Eindhoven. The 18-year-old suspect is no doubt already back on the streets to promote peace and understanding.

Oh, before I forget: there has been a terrorist attack on the St. Petersburg subway in Russia. Ten people died in it. I mention this, as it is barely reported in the Dutch media. Probably didn’t happen either. Certainly not by people with a phobia about pork. They never do anything like that.

Another thing you probably want to know: the media — all of them — have decided that mohammedans are pictured too negatively in the media. To counter that vicious right wing propaganda they have decided — all of them — to broadcast only favorable items that put them in a better light. That means only cuddly documentaries about Al Andalus and delicious recipes how to make couscous will be broadcasted. Nearly all our media are public; they are funded with taxpayers’ money only. Your taxpayer’s money certainly is at work here. As it is in the Stedelijk Museum in Amsterdam. Fully funded by tax money. They decided to hold five expositions slandering Wilders and the PVV.

25 thoughts on “The Usual Response”