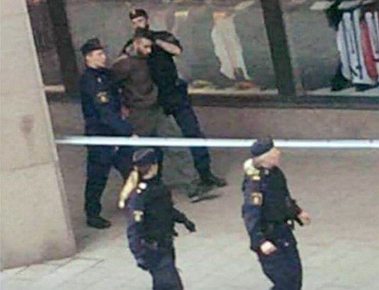 Below is an (unedited) translation that Da Capo kindly provided in the comments on last night’s news feed:

Trucks have run into the crowd and rammed Åhléns City

Aftonbladet’s reporter said that police officers warned that the case of a terrorist attack.
– I saw at least three dead, but there are probably more. It’s a complete mess here, says P4 Extras reporter Martin Svenningsen to echo.
While the truck drove into the crowd at Queen Street should a man have been springandes with a weapon, says Aftonbladet’s reporter on the scene.
“The police receive calls via the emergency of any person in the vehicle has hurt other people on Queen Street near Klarabergsgatan,” wrote police on theirwebsite.
“There have been reports of gunfire but it is not confirmed at this time,” continues the police.
According to Aftonbladet reporter smelled gunpowder in place.
The time 15:40 calls the police people to avoid the city center around the Sergel Square and the central area where around. At 15:54 affirmed authority alarm about shootings even at Fridhemsplan.
Underground traffic and other traffic in the city has been turned off until further notice.
“Commuter trains go out of town, leaving the travelers and then turn back empty,” writes the Stockholm police on Twitter.
According to witnesses to SVT News is all over Stockholm Central Station evacuated.
– More hundred people ran out of the station, said a witness to SVT.
Although the Parliament House has been closed and the few politicians and bureaucrats who are there on Friday afternoon may not leave the building, reports news agency TT.
Police urge people to completely stay away from downtown Stockholm.
– Our general recommendation is to avoid the city at all now, both on foot and in cars, says Lars Byström, spokesperson of the Stockholm police.
The truck used in the terrorist attack belongs Spendrups and cut from the company earlier in the day.
– In connection with the supply of restaurant Caliente it is someone who jumps into the driver’s cabin and drive away with the car while the driver unloads, says communications director Mårten Lyth said.
Prime Minister Stefan Löfven, who are in Skåne in the afternoon, said according to echo in his first comments to the press:
– Sweden has been attacked. Everything indicates that this is a terrorist act.
SD leader Jimmie Åkesson comments on the terrorist attack on Facebook:
“Terrible events in Stockholm at the moment, with both the dead and injured. Let our thoughts go to the victims and their families.”
King states that he and the entire royal family “with dismay” has “taken note of the information about the afternoon’s attack in Stockholm.”
– Background and scope of the incident are not yet known. We follow the development but already our thoughts are with the victims and their families, said the king in a statement.
The text is updated.

27 thoughts on “Terror Atack in Stockholm”