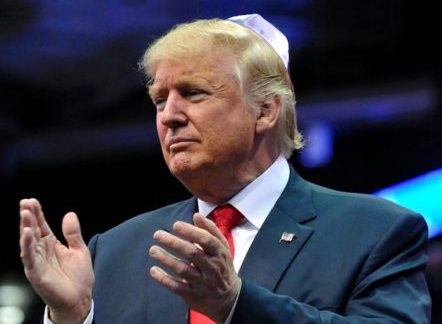 According to The Washington Post, President Donald Trump has decided to become a Jew:

Sources in the White House say that President Trump has begun the process of converting to Judaism.

“He’s always admired the Jews,” said the source, “but this is basically a business decision — he’s backing a winner. ‘Those Israelis are smart guys,’ he told me yesterday. ‘They really know how to build a wall.’ Besides, he’s been monitoring the work of his son-in-law for years, and likes what he sees.”

Some analysts see in Mr. Trump’s alleged conversion the work of the Russians. According to sources close to the CIA and the FBI, Mr. Trump’s contacts with Jewish religious authorities were facilitated by a Russian rabbi named Shlomo Rabinovich, who reportedly acts as an agent for the FSB, the successor intelligence service to the KGB. Rabbi Rabinovich runs a borscht restaurant in Borisoglebsk, but intelligence insiders say that his putative business is simply a front operation for money-laundering, gun-running, and cigarette smuggling. At the request of President Vladimir Putin, the rabbi is said to have approached Mr. Trump’s inner circle of advisors during the transition and arranged for a series of Talmud lessons for the President-elect. Donald Trump has always characterized himself as a quick learner, and his studies are now almost complete.

“You can expect an announcement from the president sometime next week,” said our White House source.

When asked about the rumors by reporters, President Trump brushed off their questions, saying: “You boys must have been hitting the Manischewitz again.”

House Minority Leader Nancy Pelosi disparaged the alleged conversion. “This is fake Jews,” she told CNN. “You can’t get any faker than Donald Trump. And, believe me, as an Italian-American grandmother, I know what a real Jew looks like!”