Update: I discovered after I posted this that the first video embed doesn’t work — the channel’s owner has disabled embedding for it. You can watch the video on YouTube instead, if you like. However, the second performance is better, in my opinion. 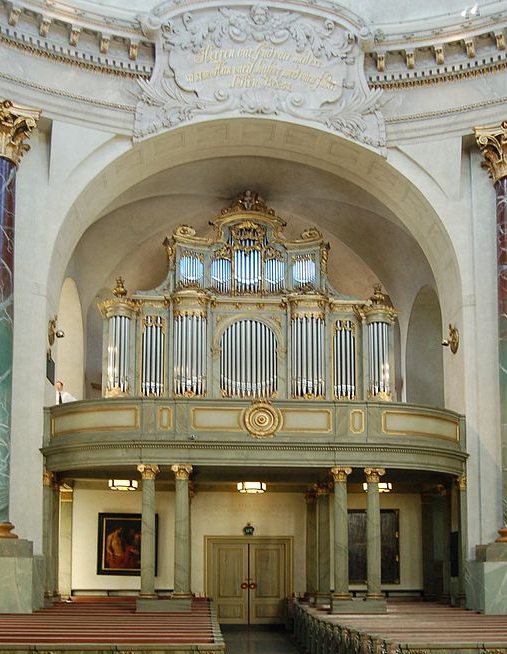 In the Anglican tradition this day is known “Maundy Thursday”, the holy day that falls on the Thursday before Easter. Dymphna tells me that Catholics call it simply “Holy Thursday”.

The name “Maundy” is derived (via the Old French mandé) from the Latin mandātum (cognate with word “mandate”), the first word of a passage from the Gospel According to John: Mandatum novum do vobis ut diligatis invicem sicut dilexi vos, “A new commandment I give to you: that you love one another, as I have loved you.” Those words were spoken before the Last Supper, at the time of the washing of feet, and are now associated with the foot-washing ritual on Maundy Thursday.

The music below isn’t directly connected with Holy Week, but the title has an appropriate penitential tone: O Lamm Gottes, unschuldig, “O innocent lamb of God”, by Johann Sebastian Bach. It is a chorale prelude, BWV 656, one of Great Eighteen Chorale Preludes (or Leipzig Chorales, BWV 651-668). I’ve included two YouTube versions of it, both played on the pipe organ.

The first version is useful for those who read music, since it follows the score all the way through. It was performed by Bine-Katrine Bryndorf at an unspecified location:

The second version is the best performance of the piece that I can find, by a young Swede named Ulf Norberg. It, too, is useful, because you can watch the organist’s hands and feet at work.

Interestingly, there is almost no pedal action in this prelude — not until well after halfway through, at the point where (I think) the actual chorale begins.

The performance was recorded at a live concert in Hedvig Eleonora Church, Stockholm, on March 22, 2015:

In addition to the fact that it’s Holy Week, this essay was occasioned by the recent terrorist attack in Sweden. It made me think about young Ulf Norberg and the pipe organ in Hedvig Eleonora Church in Stockholm — which is presumably not far from the blood-drenched streets where the jihad beer truck ran down and killed four people on April 7.

This magnificent music and that magnificent church are what Sweden is blithely throwing away for the sake of a godless Multicultural utopia. And not just Sweden — all of Western Europe, and eventually the rest of the West, if current trends don’t change their course.

Nevertheless, futile though it may be, it is one of the principal motives behind my choice to continue the struggle against the Great Jihad. The music of J.S. Bach represents the apotheosis of the human spirit, and will remain such even as the civilization that created it turns to dust.

As I wrote some years ago:

There is no ideology in this, none at all. The sole purpose of all of the sweat and learning and training and hardship is to create in the listener (and the performer) a moment of aesthetic rapture, all in the service of the greater glory of God. There is nothing more.

But ideology may well destroy it. Just as there are no longer any Buddhas at Bamiyan, nor any Buddhists to carve them or contemplate them, there may come a day when all the pipes lie strewn across the paving stones of a shattered building, with no more fingers to race across the keyboards nor feet to tap the pedals.

That’s one of the main reasons why I do what I do: so that this shall not pass from the face of the earth.

“Love one another, as I have loved you.” Soli Deo gloria.