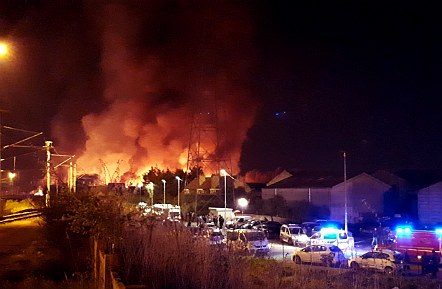 A well-appointed migrant camp at Grand-Synthe in northern France went up in flames after rival gangs of Afghans and Kurds engaged in some culturally enriched kinetic disagreement.

Many thanks to Ava Lon for translating this article from F. DeSouche:

Grande-Synthe: Migrant camp burned after a brawl between Afghans and Kurds

In March 2016 the Grande-Synthe camp opened its doors to migrants.

That day was supposed to be marked in stone. For the first time, a humanitarian association, accustomed to distant horizons, opens a camp for migrants in France. After months of survival in tents, in the mud, this Monday, March 7, the 1,050 exiles in transit in Grande-Synthe (North) will be able to join a living space meeting international standards.

[…] In Calais, the State — which clearly realized in August 2015 that it had to offer shelter — opted for an arrangement of 125 heated, numbered containers of 12 places each. In Grande-Synthe, Doctors Without Borders has placed wooden sheds arranged by micro-districts. 213 heated shelters are available for groups of four. In Calais, for only five months more than 15 million euros were needed to house 1,500 people. Whereas, in the nearby commune of Dunkirk, once it had obtained the prefectural green light, humanitarian workers opened a camp in less than two months for a cost of 3.1 million euros. […]

2.5 million euros should be needed to make the site work in 2016. “An amount that the municipality cannot manage, and which should be financed by the State,” says Mr. Carême. […]

[photo caption: After fights, a violent fire ravaged the 300 wooden chalets of the camp at La Linière, which sheltered about 1,500 migrants.]

A brawl, apparently between two ethnic groups, caused at least three to be wounded by weapons on Monday. At 9 pm La Linière camp was in flames.

La Linière camp at Grande-Synthe (outskirts of Dunkirk) was in flames on Monday evening around 9 pm. At the time of the arrival of paramedics’ units at the entrance of the camp, an apparent brawl between two ethnic groups required the engagement of the mobile forces to separate the belligerents. The police officers had to use 21 tear gas grenades and a stun grenade. The incident caused at least three to be wounded by steel [knives or machetes].

10 thoughts on “Brawl and Conflagration at Grande-Synthe”