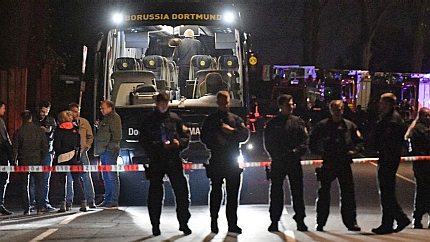 The German section of our translation team has been discussing the bomb attack in Dortmund at length on skype for the past 24 hours. The consensus is that there is something fishy about what’s going on.

For those who have not yet seen the story, last night three explosions went off and damaged the team bus for the soccer team Borussia Dortmund, a.k.a. BVB. A policeman and one football player were wounded.

Further on, the ISIS expert noted that the claim uses the German words “Kalifat” and “Islamischer Staat” instead of the Arabic words “khilafa” and “Dawla Islamiya”. The Arabic words are also common even among foreign ISIS followers who are not proficient in Arabic.

The whole thing gives me a Breivik déja vu, as if we were being softened up for the revelation that this bomb attack was in fact the act of right-wing extremists trying to put the blame on Islam. However, every neo-Nazi group in Germany is thoroughly infiltrated by the intelligence services, which means that no extreme-right bombing could take place without the services’ knowing about it in advance.

However, if this does turn out to be an elaborate false-flag operation, one must assume it is an integral part of Chancellor Merkel’s election campaign, designed to revive the flagging fortunes of the CDU. Such an act would justify a crackdown on the AfD and even greater restrictions on “hate speech” in Germany.

The following video is from a press conference given by Frauke Köhler, the press spokesman and General State Prosecutor in North Rhine-Westphalia. Many thanks to Egri Nök for the translation, and to Vlad Tepes for the subtitling:

Below is the text of the supposed claim of responsibility: 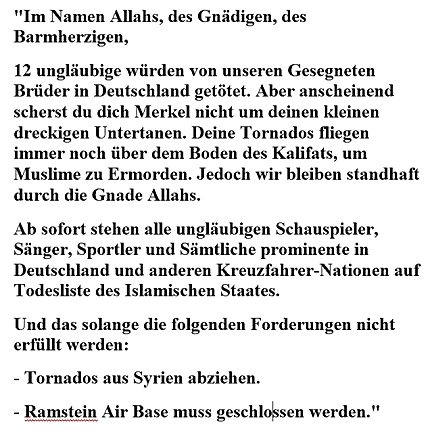 In the Name of Allah, the Holy, the Merciful,

12 unbelievers were killed by our blessed brothers in Germany. But apparently you don’t give a damn about your filthy subjects. Your Tornados [name of fighter plane] still fly over the ground of the Caliphate to murder Muslims. However we will remain steadfast through the mercy of Allah.

Effective immediately all unbelieving actors, singers, athletes and all Altogether [sic] prominent people in Germany and other Crusader-Nations will be on death list of the Islamic State.

For as long as the following demands are not met:

The following article from the Frankfurter Allgemeine Zeitung, also translated by Egri Nök, includes the detailed interview with the terrorism expert mentioned by FOCUS.de:

Dortmund Attack: Neumann: “I do not deem this resolved”

The General Prosecutor suspects an Islamist background for the attack on the BVB bus. The terrorism researcher Peter Neumann explains in a FAZ.NET interview why right-extremists are a possibility, too, and that he would invite his family to the Champions League game in Dortmund.

Mr. Neumann, this is the first time that there was an attack on a German football team. Police are investigating in all directions; the General Prosecutor suspects an Islamist background. Do you share their assessment?

I deem this possible, but far from resolved. The claim of responsibility that was found at the crime scene is very unusual. I would determine Islamist terror only as soon as a suspect is identified, or when a claim by the “Islamic State” (ISIS) that confirms it appears in addition.

What makes the claim of responsibility atypical?

Firstly, it was found in three copies at the crime scene. This has never happened before. And the language is unusual. Followers of ISIS speak of “Khilafah”, and not, like us, of a “Caliphate.” Lastly, the demands in the letter are, by ISIS standards, quite modest. Normally it says: “We continue to fight until you are exterminated.” Usually jihadists are not content with the closure of an air force base and the termination of an operation in Syria.

Often, ISIS attackers risk their lives during attacks or deliberately count on their own death. Does this also speak against an Islamist background?

Even for ISIS, martyrdom needs to make military sense. They do not kill themselves just for fun, as this weakens the power of the “Caliphate”. There needs to be more accomplished with suicide than without. When using booby traps, as in Dortmund, this does not necessarily have to be the case.

The construction of the explosive devices with metal pins and a range of more than 100 metres appears professional.

That is right. But not only ISIS has got this expertise, but also, for example, right-extremists and other fundamentalists.

Does this mean that you can think of other offenders?

Everyone who wants an attack to look as if it had been committed by jihadists. Therefore, I would be interested in which explosive material was used. Triacetontriperoxide, in short TATP, is quite in vogue with Islamists and would harden the suspicions of the General State Prosecutor.

How should security authorities and politicians deal with the attack?

The terror alert in Germany has not changed. It has been very high continuously for some time now, and remains that way. We need to anticipate attacks like this. At the same time, I do not think that in the future there will be an attack like this every single day. We should not lose our poise. It is about clarifying this attack and bringing the facts into daylight as quickly as possible.

If you had tickets, would you go to the Champions League match tonight in the Dortmund Stadium?

By all means. And I would invite my whole family.

Who is behind the attack on Borussia Dortmund? The investigators have two possible Islamists in their sights. But the suspicions seem thin; the claim poses a conundrum.

“In the name of Allah, the Merciful, the Almighty”: this is the beginning of the single-paged claim of responsibility, of which three copies were found on Tuesday evening in the south of Dortmund. Here, where around 7:15 PM three explosives detonated at the moment when the team of BoRussia Dortmund headed towards the stadium on their team bus.

According to official reports, the bombs were equipped with metal pins, their destructive force good for a hundred meters. But the safety glass of the bus, a hedge, and a lot of luck prevented worse. The centre-back Marc Bartra and a policeman were injured, but given the danger, they were lucky: one piece of shrapnel missed the bus passengers and pierced the headrest of one of the seats. “We consider it luck that nothing worse happened,” the spokesman for the General State Attorney, Frauke Köhler, said.

Two men from North Rhine-Westphalia rapidly moved onto the investigators’ radar: early Wednesday morning, special forces raided the apartments of the Iraqi Abdul Baset al-O., 25, and the German Abdullah al-Z. in Wuppertal and Fröndenberg near Unna. The General State Prosecutor classes them in the “Islamist continuum”. Al-O. was arrested; the application for an arrest warrant is being audited. He did not draw attention as an Islamist in Germany, but apparently he did in Iraq.

[photo caption: Police cordon off the scene after the attack on the Dortmunder team bus]

In the case of the attack in Dortmund, the state of evidence against the suspects appears to be thin. They might not have anything to do with the attack. Police surprised al-Z. sleeping in his bed, his child in his arm. The 28-year-old got into authorities’ sights, according information made available to Spiegel, because he had an umbrella from the hotel where the football team stayed. What speaks against Al-O, on the other hand, is that during a phone call monitored by the intelligence service a few days ago, a yet unknown person said to him “The explosive device is ready.”

What is causing particular irritation among investigators is the claim of responsibility found at the scene which appears to be operating with clichés from the repertoire of Islamist propaganda, but seems inconsistent as a whole. Thusly, the attackers demand — quite unusually, because very concrete — the withdrawal of “Tornado” military jets from Syria, and the closure of the “Ramstein Air Base”. Until those demands are met, “all unbelieving actors, singers, athletes and all celebrities in Germany and other crusader-nations are on the death list of the Islamic State,” the paper says.

The existence of such a document contradicts all experience that European security authorities have of ISIS’ claims of responsibility. Nevertheless, it cannot be excluded that Islamists, who have had no connection to the terror militia so far, were inspired by their propaganda and chose to do a deed in their name. This form of join-in terrorism has been quite frequent lately in the West, it is particularly difficult to prevent. It is equally imaginable that the actual perpetrators deliberately wanted to lay a false trail and throw suspicions on Islamists.

There are even larger doubts into the authenticity of the other claim of responsibility which was published on the website Indymedia. The assessment of the investigators is congruent with a statement by the webmaster: “Neither content nor language point towards a left background, therefore, we deleted it shortly after its posting,” the platform announced. The post claimed a left-extremist background for the deed: The bus had been attacked as a “symbolic statement for the policies of the BVB”, which is not adequately committed against racists, Nazis and right-wing populists.

The interior minister of North Rhine Westphalia, Ralf Jäger (SPD), said the motive of the perpetrators was to create “the greatest possible publicity”. They succeeded. But, according to Jäger, “we in NRW will not bow down to hate and terror.”

17 thoughts on “A Feint in Dortmund?”