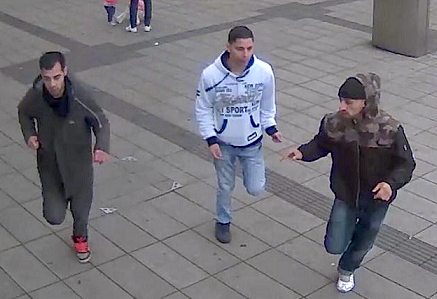 The following news stories describe two separate events that were very similar: both involve the theft of cell phones from German females by culture-enrichers.

Both articles were translated by Nash Montana. The first victim was a little girl, as reported by from FOCUS.de:

With the photo from a surveillance camera the police are now on the lookout for three alleged robbers. The crime happened last Sunday (March 19th) around 12:45pm at the subway station Essen-Steele.

The 11-year-old student had her cellphone in her hand when she was spoken to by a stranger. He asked her if he could use her cell phone to make a call. But after the girl had denied his request several times, he kicked her in the knee. At the same time the young man pushed her back, took the iPhone SE from her and ran away.

A witness (16) placed himself in the path of the fleeing man and managed to hold him for a short while. But when two other men, probably partners in crime, came to help the first one, the 16-year-old had no chance.

Report to the police in Essen

The trio took the stairs towards the bus terminal, and then they ran towards Steele’s Innercity [district]. While they were fleeing this picture was taken by a surveillance camera.

The investigators are asking: Who knows these young men? Who can give any information as to where they live? Tips may be phoned in to the youth investigative division at 0201/829-0

The second incident occurred a few days later in Cologne, and the victim was older. From PolitikStube:

Cologne: “This is my cell phone now — You’ve given it to me! — Or else I will stab you“

On March 25th an unknown perpetrator ripped her cell phone out of her hands and threatened her with a sharp object. The police are asking for witnesses.

The 34-year-old woman was walking by the area of the bank on Rudolfsplatz towards 5:40pm, waiting for a girlfriend. Suddenly a stranger grabbed her cell phone from her hand. When he said “This is my cell phone now — you’ve given it to me!” the irritated woman demanded that the phone to be given back to her. The offender’s answer was to brandish a sharp object in his hand, and he threatened to stab her. After he took a few steps towards his victim and repeated his demand, the fearful woman retreated. The man then quickly walked away towards Schaafenstrasse.

The 40- to 50-year-old Southern European looking man is about 165 to 170 centimeters tall. He has short black hair and a three-day beard, and he spoke German with an accent. He was wearing a black-brown jacket and dark-colored pants.

Tips can be phoned in to the criminal division 51 by dialing 0221-229-0 or by email to poststelle.koeln@polizei.nrw.de.

8 thoughts on “Your Phone or Your Life!”