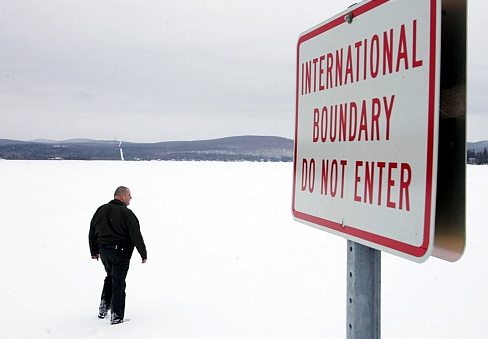 A few days after President Trump issued his infamous “travel ban” executive order, stories began appearing in the media about illegal aliens in the USA who were braving arctic conditions to walk across the border from the USA into Canada. The reports implied (or even stated) that the puir, puir “refugees” were fleeing the country before the Xenophobe-in-Chief could deport them back to wherever they came from.

But were the border-crossers really running away from the Evil Trump? Or were they running towards the welcoming arms of Prime Minister Justin “Baby Doc” Trudeau? After all, Canada offers newly-arrived culture-enrichers far more generous welfare benefits than they could get in the USA, even when the country was governed by the Islamophilic Barack Hussein Obama.

A long-time Gates of Vienna reader named Gort sends this first-hand report on the situation at the border between North Dakota and Canada:

Since I noticed mention of Emerson/immigrants in the news feed, I thought I would send you a note.

I have been reduced to the employment status of “truck driver” by circumstances. It isn’t an unpleasant way to get by, since the tractors are all pretty new Kenworths and the trailers are (for the most part) pretty new. I take loads of various things into Canada from North Dakota through the port of Emerson, several times a week.

Yesterday as I listened to the CBC while up in the land of minions, I heard a story about all the poor people who were trudging across the tundra by Emerson to escape the scary USA. When I crossed back into the States I asked the border personnel if she knew anything about an upsurge in furtive border crossings, and mentioned the CBC story. She said that this sort of thing is nothing new: “They have been doing this for a long time”.

It seems that these people aren’t just fleeing a country that has come to its senses, they are sucked into a vacuum created by the kumbaya social-justice mentality up north.

Two fellows from Ghana tried the tundra crossing around Christmastime and lost some of their fingers to the gods of entropy. I think that made the news too.