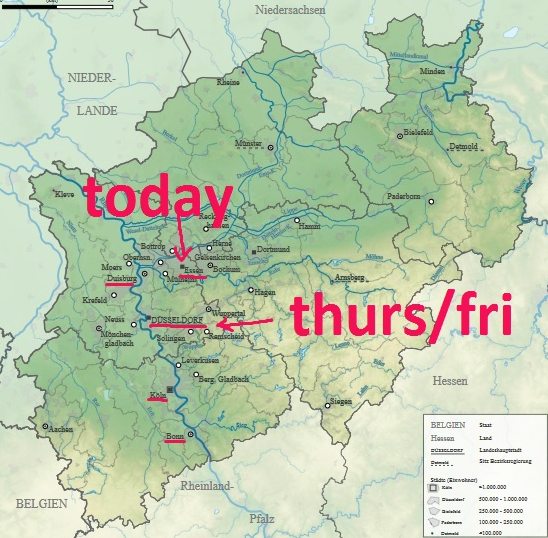 And the beat goes on.

Today a shopping center in the German city of Essen was evacuated and closed after the security services received indications of an Islamic terror attack. Egri Nök, who translated the article, created the map, and wrote the commentary below, includes this note about the regional clumping of recent attacks and alerts:

All this is happening in the same region of North Rhine-Westphalia: Thursday the Düsseldorf axe attack, Friday a senior chopped with a machete, and today the shopping centre in Essen.

Below is a video news report from Reuters:

Surprisingly enough, the authorities have already acknowledged the role that JIM played in the planned attack. The following report was published today by the NRW public broadcaster WDR:

The first investigative results after the terror alarm in Essen have been released. As police announced Saturday (March 11 2017) afternoon, the apartment of a man in Oberhausen has been searched. The owner of the apartment is being interrogated. Shortly thereafter the arrest of another man was announced. Police arrested him in an internet cafe in Oberhausen. His apartment is to be searched, too. Both men are not suspects at this moment. According to police, there is “concrete information” of a possible attack on the shopping mall Limbecker Platz in Essen.

According to information obtained by WDR, the case has an Islamist background. Someone from abroad with connections to the terror militia “Islamic State” (IS) reportedly ordered a bomb attack in Essen and sent instructions for building the bomb. A man who traveled to Syria to join ISIS is said to be connected to this.

The tip came on Friday

According to police, they received the information about the attack on Friday from another security agency. The shopping center was evacuated and cordoned off on Saturday morning. It will remain completely closed all day long.

After the police operation in Oberhausen, police presence at the Centro shopping mall was also strengthened on Saturday afternoon. There are no concrete indicators of a planned attack there. But in general Centro is “a possible target,” police announced. Back at the end of 2016 alleged plans for an attack on the Centro mall became known.

Federal security agencies are “closely cooperating” on this case, a spokesman for the Federal Interior Ministry says. They are in “constant contact” in the Joint Counter Terrorism Centre (GTAZ) of Federation and States. The police in Essen additionally set up a situation center. A spokesman calls the operation “large-scale”.

Officers with machine guns in safety vests secure the shopping center in Essen. All entries and access roads are closed. Police set up a telephone number for concerned citizens at 0201-8291055.

Egri Nök sends this summary of this week’s events in the region:

Today’s alarm in Essen shows there is no rest for North Rhine-Westphalia.

The whole area — Essen, Düsseldorf, Duisburg Marxloh, where Lauren Southern filmed her video, Bonn, where young German men are beaten to death just for fun — is one of the most densely=populated areas in Germany. I would not go so far as to call it a megalopolis, because Düsseldorf and Cologne are still their own entities, but the cities upstream just melt into each other:

“Die Metropolis Region Rhein-Ruhr with ten Million inhabitants is one of the most densely populated, and most populous, regions in Europe.” (Wikipedia, Nordrhein-Westfalen, Bevölkerung).

All the Muslims and asylum applicants move there (and to Berlin) because their cousins already live there.

That, and the fact that North Rhine Westphalia is under a red-green government, explains a lot.

12 thoughts on “Terror Alert in Essen”