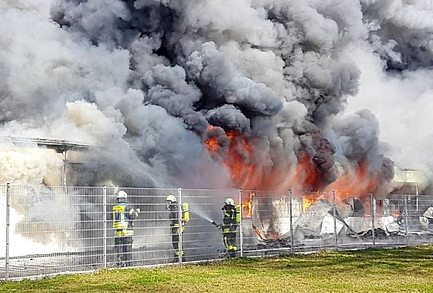 Another day, another asylum center burned to the ground.

Today’s arson was committed by a Somali resident at a center in the German town of Mönchengladbach. Many thanks to Egri Nök for translating this article from Express.de:

[Photo caption: Thursday before noon, a refugee shelter in Carl-Diem-Straße in Mönchengladbach burnt to the ground completely. The inhabitants accuse an asylum seeker from Somalia of setting the fire. He was arrested.]

A fire broke out in a refugee shelter on Carl-Diem-Straße shortly after 10 AM CET. The flames spread rapidly. The container modules which housed refugees from different countries were soon fully ablaze.

Firefighters could basically only let it burn down in a controlled manner. There was nothing left to save.

Did an inhabitant set the fire?

Police arrested a 21-year-old asylum seeker from Somalia. Other inhabitants accused him to the police of setting the fire.

It is not certain if he indeed set the fire. Police began further investigations.

No one was injured. The refugees are being taken to other shelters at the moment.

14 thoughts on “Somali Burns Down Asylum Center in Mönchengladbach”