As mentioned earlier, there was rioting by Dutch Turks in Rotterdam tonight. Here’s a brief video.

Below is a report on Rotterdam by our Dutch correspondent H. Numan. 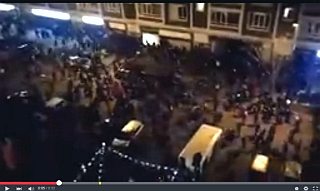 Riots in Rotterdam
by H. Numan

Last night [or tonight, if you’re in the USA] serious riots erupted in Rotterdam. Turkish-Dutch citizens ran amok after the Dutch government refused entry to the country to Turkish minister for family affairs Fatma Kaya and declared her persona non grata. She was extradited to Germany.

Riot police had to quell the unrest of Turkish-Dutch citizens with several charges and water cannons.

The Turkish minister was on her way to campaign for the referendum to be held in the 15th of April in Turkey. Turks can vote to give even more power to president Erdogan, so he can rule as a dictator for the rest of his life. Or not, but that possibility is rather remote. The German government didn’t like it, but they didn’t dare to defy the sultan-to-be. The Dutch government, surprisingly, did.

The mohammedan mayor of Rotterdam is furious, at minister Kaya as well as the Turkish consul in Rotterdam who outright lied to him. The latter called upon Turkish-Dutch citizens to gather around the consulate to voice their protests. Which they did in droves.

The Turkish government replied that the Dutch embassy is now under protection of the police, as people might do something nasty. The Dutch ambassador cannot be extradited, as he is not in the country. The Turkish government has stated that he can stay wherever he is for the moment, and is considering many more measures in retaliation.

Surprising? Not really. As you all know, Erdogan is flexing his muscles wherever he can. Milk anything for what it’s worth. Merkel caved in rather quickly, and allowed a Turkish minister to actively campaign in Germany. But Rutte didn’t. This surprised many. At first the Dutch government tried to negotiate with Ankara, but in vain. Total surrender is the fashion of the day, not a face-saving solution.

Rutte is in serious domestic trouble. His party isn’t doing half as well as the media would like you to believe. He is fighting a last-ditch battle for his own political survival. He successor Klaas Dijkhof is already waiting to take over from him. The best way to cure domestic trouble is to look for a nice little foreign brawl. The Argentinean junta tried it. Thatcher did it with great success. Erdogan, so far, did it better than he could hope for. Rutte is trying to win the elections by pretending he has a spine.

That would kill two birds with one stone: he shows his enemies within the party he’s not done yet. And Wilders is a member of the opposition. All he can do is walk around with a banner in front of the Turkish embassy and very little else. If Rutte pulls this one off, he’ll be the winner. Certainly not Wilders.

Though Wilders is proven right about his position on dual nationalities. He has said so for twelve years, and that will definitely work in his advantage. But over all, Rutte will be the man who defied the great Turk, not Wilders. Here’s the statement by the Dutch government.

Can a man serve two masters? No, he can’t. We worked that out in the middle ages. The Hundred Years’ War, and in Holland the Hook and Cod wars were the result.

Most European nations have had similar experiences. After those wars, real nations slowly emerged and the lesson learned was that one man can only serve one master. Not two at the same time. That lesson has been intentionally forgotten by the ’68 generation and their offspring. Nations are soooooo old fashioned.

These riots are the first, but almost certainly won’t be the last in The Netherlands. Turkish-Dutch citizens are Turks first, Mohammedans second. Only after that they regretfully admit they hold Dutch nationality, with great shame, at that. Moroccans exactly the same, and that goes for every mohammedan in the country. There are very few mohammedans who openly say they are Dutch first or Dutch only. The few that do almost invariably do that wearing a headscarf or something else to remind people they are first and foremost mohammedans.

That is what Wilders and the PVV are fighting against.

30 thoughts on “Riots in Rotterdam”