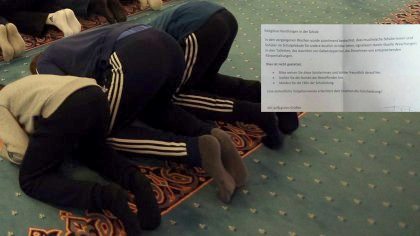 A school in Germany has caused a PC controversy by banning prayers that are “provocative”; i.e. publicly visible. Multiculturally-minded critics feel the action is discriminatory towards Muslims.

Many thanks to Nash Montana for translating this article from Der Westen:

Wuppertal. Controversy about the Johannes Rau Gymnasium in Wuppertal: An internal notification by the school administration sent to the desks of the teachers made its way into the public eye and it has been shared on Facebook and discussed dozens of times.

The controversial content: “In recent weeks it has been increasingly observed how Muslim students were praying on school grounds in a way that was very visible to others, signaled by ritual washing in the toilets (bathrooms), the unrolling of prayer rugs, the taking of certain body postures. This is not allowed.”

The teachers were also asked to “report” cases to the school administration and to “determine” the names. That sounds like language the police would use. Are Muslim students being discriminated here because of their religious practices? There are massive accusations on the Internet.

This is what the district government said

The school didn’t want to make a statement. But the responsible district government Düsseldorf confirmed to us: The notification is real, it was written on February 16th. The issue is “provocative prayer” of Muslim students within the school grounds. Fellow students and teachers felt encroached upon by this behavior. So much so that the school administration took action. 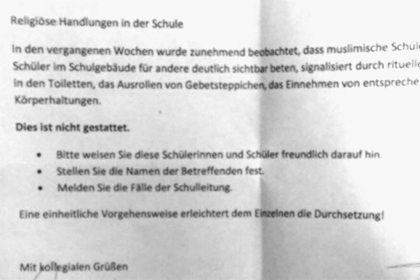 “The ban of prayer in provocative manner within the public school eye should support peaceful togetherness and peace at school,” the district government writes in its statement.

The school only wanted to collect the names of the relevant students in order to talk to them about alternative solutions such as a prayer room.

Is the prayer ban legal?

Yes, said the district government. “The school principal does have the right within the frame of school domiciliary rights. Upholding the constitutional requirement for the functioning of peaceful school activities and education, Article 5 GG, surpasses freedom of religion.” It is a similar to mandatory swimming lessons at school. Here, too, female Muslim students have to take part — even if that might go against their possible religious customs.

The district government is now trying to prevent a “mistaken impression”. The gymnasium is known for its grand engagement for the integration of students of different religions and countries of origin.

However, on the other hand, they are not entirely standing behind the school: The choice of words in the internal memo is seen as “unfortunate” by the district government. The school now has to report back to the government about their next steps in this matter.

“Provocative prayer” — is this a problem at other schools as well?

Across the Düsseldorf district there are no further cases known, says the press spokesperson Dagmar Gross.

14 thoughts on “Provocative Prayers in Wuppertal”