The head of the AfD (Alternative für Deutschland, Alternative for Germany) in Kiel is an immigrant from West Africa named Achille Demagbo. That must make heads explode amongst the Gutmenschen in Germany. In the U.S.A. he would be called an “Uncle Tom” or a “traitor to his race”.

Many thanks to Egri Nök for translating this article from the Frankfurter Allgemeine Zeitung:

Mr. Demagbo of the AfD

The head of the AfD party in Kiel deems multiculturalism a failure. Not an unusual opinion for his party. But Mr. Demagbo is from West Africa. How is that compatible?

[photo caption: Achille Demagbo says, orderliness and discipline have been second nature to him from childhood on.] 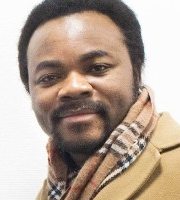 Achille Demagbo is 36 years old. Born and raised in Benin in West Africa. He has been living in Germany for 13 years now. He came to study. Linguistics. Meanwhile, he became a German citizen, and works as an interpreter. Demagbo is also a founding member and head of the AfD in Kiel. What does a black African want with this party?

Demagbo believes that his political viewpoints have always been part of his personality. “Certain values” have been part of him since childhood, “particularly orderliness and discipline.” His parents both worked as teachers; they worked their way up from the humblest beginnings. They raised Demagbo, his sister, and his three brothers strictly. Very strictly.

Demagbo says he became interested in the humanities when he was still a student, especially philosophy and sociology. “I noticed back then that the German thinkers, the German philosophers, are particularly rational, particularly systematic in presenting their ideas.” Demagbo fell in love “with German thinking”. With Immanuel Kant and also with Friedrich Nietzsche.

Political reality simply had been “pushed to the left”

Speaking of his start in Germany, Demagbo says that people helped him a lot. Teachers, fellow students, even strangers to whom he spoke in the pub to have conversations in German. To learn the language, to come closer to the culture. “I met many people who were very open-minded.” This moulded him in a positive way. He felt like a German; he was glad to belong. “Germany is my second homeland,” says Demagbo. He never had problems with racism here. On the contrary: “Germans are not xenophobic. They admire everyone who comes here, acknowledges German culture, and complies with the norms of society.”

But right from the beginning, he noticed that people in Germany are being misled. The first political information he was given was: “You are a foreigner. Be careful. Everyone to the right of the Social Democrats is against foreigners.” Demagbo says he rapidly noticed that it wasn’t true. He also noticed that “political reality” was simply “being pushed towards left”. Thereby, “a vacuum” is forming, “because a large part of the population does not feel they are being represented anymore.” The opinions of the citizens are not being integrated into the political process anymore. As an example, Demagbo cites German entry to the EU: “contrived somewhere behind the scenes”. He speaks of the achievements “which we have, in Germany, being sacrificed on the political altar in favour of leftist political experiments”. “I am against that. The EU is failing, the euro is failing. And multiculturalism has failed, too.”

Multiculti has failed in Duisburg-Marxloh

Demagbo lives in the district of Gaarden in Kiel, which has been known as a social hot spot for a long time. Many unemployed, many foreigners. Demagbo says, he “gets along wonderfully with people there”. Many of his friends are Turks, Albanians, Kurds, Syrians. Most of them the children of gastarbeiter*. “They integrated well.” But the problem are those who do not integrate. “Integration is necessary for a good togetherness. The German culture is central for me. There is no way around it. German culture and German language need to be central.” Basically, says Demagbo, it is not that complicated. And still, things have been going wrong for years.

[photo caption: In 2016, Demagbo, Leif-Erik Holm and Beatrix von Storch celebrated the entrance of the AfD into the House of Representatives in Berlin.]

As examples of failed multiculti, Demagbo names Berlin-Marzahn and Duisburg-Marxloh. He speaks of overworked police, and that there is no consideration whether people have any desire to integrate. “Everybody is taken in. That is why we have parallel societies in Germany. That is why we have forced marriages and child marriages, people who live by Sharia Law, who do not profess to our democratic values. There simply are problems with certain cultures.” He is a migrant himself, says Demagbo. And therefore can hardly be against immigration. The AfD isn’t, either. The party is just concerned with accepting people in “in a rational manner”. “I am for immigration.” But it has to happen within a framework. “Which Germany do we want for our children? These are my thoughts, my worries”, says Demagbo.

“And I want to give something back.”

He calls himself a social conservative. Twenty or thirty years ago, he says, he would surely have been a member of the CDU [Christian Democratic Union]. “Guaranteed. But the CDU drifted towards the left.” The CDU from back then does not exist anymore. The AfD now took up the topics and positions that the CDU neglected. Like the traditional family. “I have nothing against homosexuality, not at all. There are gays in the AfD who are my friends. But we need children”, says Demagbo. Therefore, the family needs to be protected. He has a family: a girlfriend and four children. He does not mind when the Thuringian AfD chief Björn Höcke speaks of the “life-affirming African proliferation type”. “That is positive. I am life-affirming.” And anyway, the allegations of racism against the AfD: [AfD co-founder Alexander] Gauland, too, has played with his children.

It bothers Demagbo when the other parties do not have the honesty to admit that the AfD has got the right approach. “When we said: If it should ever come down to it, then our borders too should be protected with firearms. What did the media make of this statement? The outcry that went through the country!” Instead, says Demagbo, now the Christmas markets need to be protected with firearms. “What kind of logic is that? It would have been much more reasonable, to protect the borders. But no, we were called racists. Xenophobes. And the consequence was the attack in Berlin, and that now we have to protect public events with firearms. The government is responsible for that.”

37 thoughts on “Meet the Face of the AfD in Kiel”