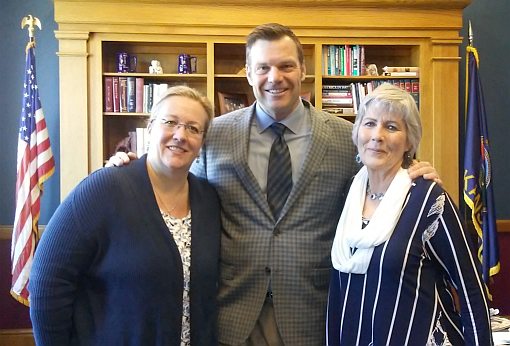 Elisabeth Sabaditsch-Wolff is currently in the USA, attending various events and speaking at some of them (see her speech at the March 4 Trump in Denver).

Yesterday she paid a visit to Kansas Secretary of State Kris Kobach in Topeka. She sends this brief report on her meeting with him:

As part of my current speaking tour in the United States I was invited to meet Kansas Secretary of State Kris Kobach in the state capital Topeka. I was told in advance that Mr. Kobach had only recently briefed President Trump on immigration matters. So it was only natural that I in turn should brief the secretary on the current state of the great migration crisis in Europe.

The secretary graciously gave me more than an hour to elaborate on the historical background the crisis, the impact on European societies and the effect on freedom of speech. In addition, I explained how Chancellor Angela Merkel had recently redefined a German from a citizen to anyone living in Germany. This ensures plenty of potential voters in future elections, voters who will not vote for the opposition parties, thus keeping Angela Merkel in power to change the face of Germany even further.

The meeting concluded with my promise keep in touch and the secretary’s promise to relay the contents of my brief to the White House.

Another fine example of transatlantic partnership in action!

Below are the talking points prepared by Elisabeth for her meeting with Mr. Kobach:

19 thoughts on “Introducing Kansas to the Great European Migration Crisis”