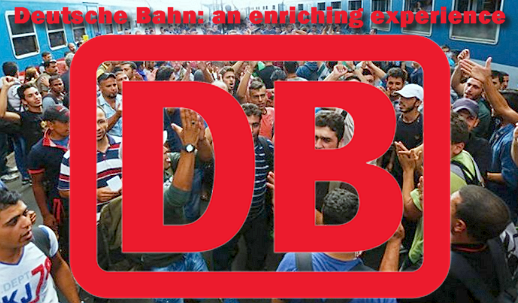 Last night we posted a propaganda video put out by Deutsche Bahn, the German state railway service. It featured a young Muslima who turned out to be a brilliant medical student, thereby shaming the native German sitting opposite her by exposing his “Islamophobic” prejudice. An improbable situation, to say the least.

In response, Egri Nök collected and translated four news stories — all published in the month of February — showing a more representative sample of what one might expect from culture-enrichers on a German train. In particular, what German women might expect from migrant men on a train.

First, from the Münchner Abendzeitung:

After several women were sexually harassed on January 29 on the Munich metropolitan train, a perpetrator has now been arrested. Police are now looking for victims.

Munich — Munich police have arrested a suspect who allegedly sexually harassed several women in the metropolitan train on January 29. Thanks to CCTV it was possible to identify him. For about two hours he allegedly tried to grope several victims. In doing so, he followed the women through the carriages. Two victims filed a police report against the unknown man at the police station in Herrsching.

Another man was present the entire time. He did not participate, but did nothing to prevent the situation.

Both involved have been identified as Eritreans, living in an asylum accommodation in the district of Starnberg. The main suspect was arrested when the institution was searched. Investigations showed that a similar incident had happened on January 22 in Munich.

Sabine Stein, head of the investigation service of the Munich federal police station said the rapid result was thanks to the good cooperation and the quick exchange of information.

Same event, different take — FOCUS.de manages to ask for witnesses without mentioning the perpetrator is an Eritrean:

In the space of two hours, 23-year-old molests 18 women on Munich metropolitan train

Federal police in Munich are investigating a 23-year-old. The man is suspected of sexually harassing several passengers in the Metropolitan Train in the end of January. He is in custody.

On January 29, an 18-year-old and a 20-year-old from Herrsching filed a complaint with police. In Germering, an unknown young man touched the face of the 18-year-old, and then touched her intimate area. The young woman changed seats several times but was followed by the man. In Weßling, the man molested a 20-year-old. He also followed her when she changed seats.

The investigators are analyzing video material. Their conclusion: in a time span of almost two hours, the man harassed 18 women by touching and clutching. He was accompanied by another man, who did not partake in the sexual harassment, but did not prevent it, either.

The investigators managed to find the 23-year-old suspect. During the search, the clothes he wore during the offense were found. He is currently held in custody. His acquaintance was located, too.

Back on January 22, the man in Munich allegedly suddenly groped a woman between her legs. Federal Police are asking women affected by the sexual harassment to contact them at the phone number 089/515550-111.

No one called the Police

CCTV recordings show that several passengers must have seen what happened on the metropolitan train, as Merkur reports. But no one called the emergency number or contacted the conductor over the intercom system.

Two women groped on a train — is it the same perpetrator?

On Tuesday an unknown man harassed a young woman on a train between Geislingen and Amstetten. First he asked about a train stop, then he sexually harassed the woman. Just a day later, the next case of this kind happened.

The woman was approached on the train on Tuesday evening around 9pm by a man approximately 25 to 30 years old. First, he only asked for the next train stop. Then the slight man suddenly stepped into her seat row and manipulated his member. The unknown man exited the train in Amstetten. Police are looking for the perpetrator.

According to police, the perpetrator is approximately 1.75s meter tall and has black hair. He spoke broken German and sported a three day beard. The man was wearing a tight black jacket. The Criminal Investigation Department Ulm are asking the couple in which the woman confided after the deed to contact them at the telephone number 0731/1880. Other passengers who might be able to provide information about the deed are asked to contact the police, too.

On Wednesday evening a 23-year-old was on the regional train heading for Ulm. She was alone in the carriage. Between Geislingen and Amstetten an unknown man approached her and sat down next to her. He demanded sexual acts from the woman. When the woman fought back, he produced a knife from his pocket and threatened her. After the perpetrator groped the young woman, he stole her purse from the pocket of her jacket and fled.

The woman describes the perpetrator as follows: 1.80 meter tall, slim build, between 30 and 40 years old. He was wearing a short light-coloured jacket and tight dark blue jeans. In addition he wore a light-coloured flat cap. The knife had a black handle. The unknown man opened it with one hand. According to initial investigations by the police, the unknown perpetrator got off the train in Urspring or Amstetten. Police are now looking for this man.

It is being investigated whether the perpetrators on Tuesday and Wednesday could be one and the same person. Police are asking for witnesses to provide information via the telephone number 0731 188-0 to clarify the incidents as quickly as possible.

A 23-year-old woman was sexually harassed by four men on the regional express from Ellwangen to Aalen. Just a week ago, there was a similar incident.

Ellwangen. A 23-year-old woman was sexually harassed on the train from Ellwangen to Aalen on Monday afternoon. The deed happened on the regional express that left Ellwangen on schedule at 17.12 h.

According to police, the woman was approached, hassled and groped by four young men. The men did not mind the fact that there was a married couple sitting in the same carriage, who witnessed the incident. This couple then placed themselves protectively in front of the young woman, and thereby caused the young men to go away, according to the police report.

The couple is asked to contact the criminal investigation department in Aalen at telephone (07361) 5800.

Police have no clear indication yet of where the four young men boarded the train, so they are also looking for witnesses who saw four men at a train station on the route, or who witnessed them boarding the train.

It is also not certain yet where the men got off the train; witnesses are sought for this too.

There are no personal descriptions of the men yet.

It is only known that they were “young” and spoke in an unknown language, police announce. Another thing that was striking was their apparent dishevelment, expressing itself “in a pungent bad smell”, says a report by the police.

The criminal investigation department is accepting every hint that could give answers and clues to the described issues at the telephone number (07361) 5800.

Police ask for information about such incidents in as timely a manner as possible. The emergency number 110 should be dialed for fast contact. Ideally, police might be able to catch the perpetrators when they are still in the train station.

Already a week ago a similar incident took place, which shows a few parallels to the current abuse.

On Saturday January 28, around 7 pm, a man sexually harassed a 16-year-old girl on the train between Ellwangen and Aalen. The suspect allegedly repeatedly hugged the 16-year-old and kissed her on the forehead and mouth. He got off the train when it stopped in Aalen. He wore grey trainers, a dark down jacket with a fur hood, and blue and white Nike shoes. He is described as approximately 20 years old, 1.70 meters tall, of normal stature, with black curls. The federal police in Stuttgart are looking for witnesses; tel. (0711) 870350.