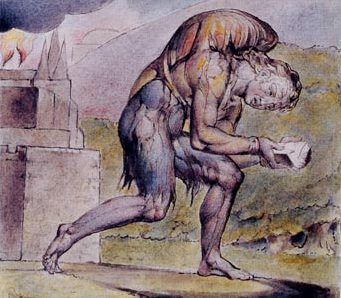 Today begins the long march of Christians through the penitential season of Lent. Gone is the bacchanalia of Mardi Gras feasting. Here come the days of fast and abstinence.

I had thought to put up a part of T.S. Eliot’s long conversion poem, Ash Wednesday.

But my sleep-deprived mind kept turning and returning to Richard Wilbur’s Love Calls Us to the Things of This World. It pulled me to notice “the things of this world” while I still can. So this is my offering instead, this exultation, one to carry with you as you also carry the ashes of mortality, the reminder: “Remember, man, you are dust and to dust you will return.” Or, as they said in my childhood, while marking my forehead with the ashes of last Palm Sunday’s fronds:

Love Calls Us to the Things of This World

The eyes open to a cry of pulleys,
And spirited from sleep, the astounded soul
Hangs for a moment bodiless and simple
As false dawn.
Outside the open window
The morning air is all awash with angels.

Some are in bed-sheets, some are in blouses,
Some are in smocks: but truly there they are.
Now they are rising together in calm swells
Of halcyon feeling, filling whatever they wear
With the deep joy of their impersonal breathing;

Now they are flying in place, conveying
The terrible speed of their omnipresence, moving
And staying like white water; and now of a sudden
They swoon down into so rapt a quiet
That nobody seems to be there.
The soul shrinks

From all that it is about to remember,
From the punctual rape of every blessèd day,
And cries,
“Oh, let there be nothing on earth but laundry,
Nothing but rosy hands in the rising steam
And clear dances done in the sight of heaven.”

Yet, as the sun acknowledges
With a warm look the world’s hunks and colors,
The soul descends once more in bitter love
To accept the waking body, saying now
In a changed voice as the man yawns and rises,
“Bring them down from their ruddy gallows;
Let there be clean linen for the backs of thieves;
Let lovers go fresh and sweet to be undone,
And the heaviest nuns walk in a pure floating
Of dark habits,
keeping their difficult balance.”

Obviously Mr. Wilbur was sound asleep when that laundry was pulled out into the sun to dry. The laundress responsible for those clean sheets and smocks was probably less moved — or moving on to sit at her mangle, ironing whatever had already dried.

So what are you “giving up” for Lent? As children, we’d struggle to come up with something that wouldn’t hurt too much. My brother always offered to give up my dessert for me.

Perhaps I will attempt this season to give up chastising others. Which means, no doubt, a very long forty-day period of silence. [No cheering in the pews, please].