Back in February 2015 a free speech event was held at the Krudttønden café in Copenhagen, with Larks Vilks as the principal speaker. An Islamic terrorist opened fire on the café during the event, killing one person. He also killed another person at a nearby synagogue before he was shot dead by police.

Agnieszka Kolek was one of the organizers of the event at the Krudttønden. The following interview with her was published earlier this month at the Polish outlet Euroislam.pl in a slightly different form. 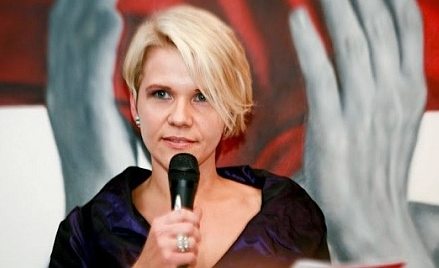 Agnieszka Kolek: I am not a victim — I SURVIVED the terrorist attack

Two years ago, on 14 February 2015 in Copenhagen, Muslim terrorist Omar Abdel Hamid El-Hussein opened fire on the participants of the conference “Art, blasphemy, freedom of expression” with the Danish caricaturist Lars Vilks.

The terrorist killed a Danish director and wounded five policemen. On the anniversary of those events Euroislam.pl talks to the co-organiser of the debate Agnieszka Kolek.

Euroislam.pl: You are a victim of the terrorist attack. How have the events from Copenhagen changed your life?

Agnieszka Kolek: I do not consider myself a victim. I am a person who survived the terrorist attack. I fight for women’s rights, freedom of speech, freedom of artistic expression, running a risk of offending Muslims. I am an adult. I know why I am doing this. I am guided by the values of a democratic and free society. I want to protect it. I show my face publicly despite the potential risk. I understand that anyone can print my photograph from the Internet, find me and attempt to kill me. It is important to be able to use this experience wisely. For instance I know one victim who decided to start fighting organisations financing terrorism.

Agnieszka Kolek: We must realise that there is an ideological war in progress with the world of political Islam. This war has been claiming an increasing number of human lives. I live in London, and I know that at any moment a terrorist attack can take place here again. I would say that we all in the West are people who survived terrorist attacks in one way or the other. I know that people are anxious to talk openly about the terrorist threat. They do not want to be called “racist” or “xenophobic”. Even if one has not lived through the event like that personally, one sometimes knows someone who witnessed it or became a victim, we visit places where attacks happened, we see them on the television. Those scenes influence us. Even if we don’t experience it consciously, to a certain degree we are all victims of the terrorists.

Let us leave aside the sociological perspective. What sort of psychological effects are the result of being exposed to terror?

Agnieszka Kolek: For everyone it was a shock. The psychological help I received in Copenhagen after the event helped a lot. Thanks to it I know that the case will never be closed. I keep realising that post-traumatic stress disorder truly exists. Even after a long time, the tension and memories come back, especially when I hear about another attack. I was very upset about Bataclan and Orlando.

Why has information about those two places affected you particularly?

Agnieszka Kolek: In each case the terrorist was shooting at people gathered in a confined space. I know how it looks like when a terrorist starts to hunt and kill one person after another. You have two options then — wait for your death or lay between the bodies and play dead. When information about another attack comes through I know I have to look after myself more than usual, get enough sleep, because my system enters the state of high alert.

How do you deal with anxiety?

Agnieszka Kolek: I have invested my time in a self defence course. Skills I have learned increase my chances of survival in case of another attack. I gained an awareness of surroundings. I know who exits the bus after me, who enters the same room. In public spaces I check the location of the emergency exit and where people could potentially hide in case of an attack.

How do your relatives deal with your public activity? Has anyone from your family come to you and said something like “give it a break, stop putting yourself in danger”?

Agnieszka Kolek: During the attack in Copenhagen, my brother was there with me. I remember our first meeting afterwards. I was crying and he was hugging me and I could feel him trembling. It is difficult for me to talk about it even after two years. My parents also support me. They have never pushed me to stop caring about freedom and abandon my activity. After the attack, I have possibly become a better sister and daughter. I appreciate life more and I know how fragile and short it is. I try to find time for the relatives and make sure not to miss the closeness. Now I care to spend time not next to each other but truly together. Right now I am visiting my parents in Poland.

Mere information about terrorist attacks is a source of distress to you. How do you perceive commentaries by various media experts and politicians, who in such situations ritually write about increasing Islamophobia, the small percentage of terrorists among Muslims, or that there is no connection between Islam and terrorism?

Agnieszka Kolek: Such statements irritate me. I keep asking myself: how many people still have to die for media and politicians to find the courage to tell the truth about dangers of political Islam? Why in the aftermath of such events does no-one mention preachers of hatred who in their mosques call for killing unbelievers?!

You have first-hand experience not only of Islamic terrorism but also of political correctness. What do you think about it?

Agnieszka Kolek: Just after the terrorist attack I was talking to a journalist from Channel 4. This lady wanted to gag me; she wouldn’t allow the witness description of what had just happened. She was even trying to change the subject and was suggesting that I can only blame myself for going to Denmark to participate in the debate with the caricaturist of Muhammad — Lars Vilks. Unfortunately, the media would do anything not to allow the public to understand who wants to kill whom, and why. Journalists often try to excuse the terrorists and blame the victims. They defend someone who kills and call their victims, who are forced to live with death sentences issued by Islamic imams, “controversial”.

Agnieszka Kolek: Opinions of journalists about this educated artist and art historian are in my view a crime against freedom of speech and artistic expression. This man defends freedom in the arts, as a result of which he cannot live a normal life. He is constantly being guarded by the police. Recently, he had to go to the hospital and on his way, due to security concerns, he had to play dead! Many people turned away from him out of fear. Lars Vilks lives in a complete isolation and the media portray him as a danger — at the same time they vindicate those who want him dead.

After the attack on “Charlie Hebdo”, there were voices demanding not to offend Muslims. Those commentators also claimed that if there were no caricatures of Muhammad, there would be no terrorist attacks.

Agnieszka Kolek: Those people do not understand that accepting the Islamic concept of blasphemy is the end of free speech in Europe and the beginning of the rule of sharia law. Self-censoring, we give in to the supporters of the sharia. This way we agree to the enforcement of the Koranic law, instead of the democracy and pluralism in Europe. Anyone could come to the meeting with Lars Vilks and criticise his activity. One could express one’s disagreement differently — not by killing people. This was not about the hurt feelings of Muslims but about the Islamic concept of blasphemy. For offending Islam, according to sharia law, the punishment is death. The shooter was radicalised in the prison, he was attending a mosque, listening to hate preachers and finally came to kill us. Radical Muslims reach for terrorism to gag critics of Islam, to isolate and intimidate them. Claiming that “artists can only blame themselves because they commit blasphemy”, to me resembles defending a rapist who justifies his violence by the fact that a women was walking home alone at night in too short a skirt.

Media often claim that it is not the Islamic ideology but mental disorders that cause terrorism.

Agnieszka Kolek: Many people struggle with depression, emotional problems and social exclusion. Poles living in the West often go through a difficult time; some are not treated well, however, we hear of none reaching for the gun. Let us remember that in Europe there are mosques where open calls for killing unbelievers take place — both Christians and Jews. These are not just words. Those calls turn into actions.

Maybe it is police incompetence that constitutes the problem? Security services cannot cope with the terrorist threat.

Agnieszka Kolek: First of all, thanks to the sacrifice and courage of the police I can talk to you today. I am grateful to them for being alive. These people are risking their lives not because they want to be heroes but because they see protecting others as their duty. When problems appear, politicians vilify them. The police work, after all, within the boundaries of law. Therefore, they can do only as much as the politicians allow. Society should enforce the ruling on equipping police accordingly, to counteract terrorism. Currently, the law does not facilitate the fight against terrorism; in many cases law enforcement officers have their hands tied. To stop someone they must have hard evidence. The police officers are afraid of being accused of being racist, and yet there are those who just wait for them to stumble. Law enforcement has conflicting goals. Police officers are working after hours, they are exhausted mentally, and rather than support them, politicians make scapegoats out of them. And for that politicians should be held responsible before a court of law. Nobody has a right to expose their own citizens to danger.

Thank you for the conversation.

Agnieszka Kolek is an artist and teacher of fine arts, curator of the London festival Passion for Freedom; for her artistic activities, in 2013 she received the Pole of the Year award in Great Britain.