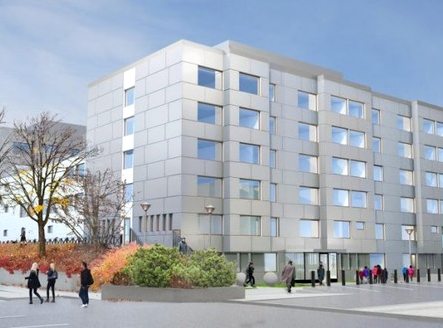 As we reported earlier this month, for a while it seemed that there would be no new police station built in Rinkeby, a notorious culturally enriched suburb of Stockholm. The neighborhood was just too dangerous — no contractor was willing to submit a bid. The risk of vandalism and assault would, at the very least, have required armed guards on the site 24/7.

However, in the past two weeks these difficulties have apparently been overcome. A new heavily armored police station will be built, but for their own protection the police officers who work in it may have to be driven to and from the building, rather than take public transportation.

Many thanks to Linda Andersson for translating this article from Fria Tider:

The new police building in Rinkeby

DOMESTIC. The new police station in Rinkeby is going to be built after all. But police officers are worried about how the working environment should be in the violent immigrant area. Therefore, they may be offered a lift to the station.

The planned police building in Rinkeby sounds more like a military installation. Bulletproof windows, walls reinforced with sheet metal and fencing around it. This is what it will look like, the newspaper In the Middle of Stockholm reported.

In addition, the building is classified as protected, which means that you can get a year in prison if you so much as photograph it.

According to In the Middle of Stockholm, however, there are problems. Police officers are worried about what the working environment will be like.

Those who will be working in Rinkeby do not want to use public transport and take the subway. It’s too dangerous. One suggestion is secured parking for the private cars of police personnel. Another is that the police will be driven back and forth from work. Local Police Area Manager Niclas Andersson hopes, however, that it will not be needed.

Christoffer Ersenius, the local union president for the police district of Rinkeby, explains that police officers working in the area are easily recognized, and understands their concerns.

Houses on the Rinkeby avenue are planned to be rebuilt as a police station, which is expected to be 6750 square meters (70,000 square feet). The cost of the reconstruction, which the property owner Familjebostäder will cover, is expected to come to SEK 380 million (US $43 million). The police will then pay a rental cost of at least SEK 14 million (US $1.6 million) per year to Familjebostäder. The building, which hopefully will be ready in 2019, will accommodate approximately 250 employees.

“The police are welcome. But we can not wait any longer, not until 2019. Then it’s too late. Check out how it looks here today,” says Rinkeby villager Sudi Khalid to In the Middle of Stockholm.

The operational decision states that threats and vandalism are dangers during construction. It is noted that “security will be needed around the clock during the work.”

18 thoughts on “A New Police Fortress for Rinkeby”