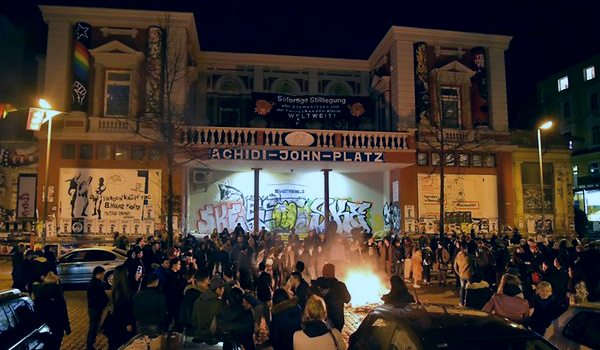 Egri Nök, who translated this brief piece from the Hamburger Morgenpost, adds this bit of context:

The building in the Background is an Antifa squat, by the way. It used to be a theater and they turned it into a squat in 1989. And the name of the square is not “Achidi John Place”, of course; they just put that sign up there.

Commotion in the Schanze

[photo caption: More than 300 persons gathered for a spontaneous demonstration in the Schanze. Photo: JOTO]

Trash cans burning, sirens howling through the night: there was a large police action at Schulterblatt on Friday evening. At about 9pm CET passers-by reported to police that around 300 demonstrators had gathered on the street. 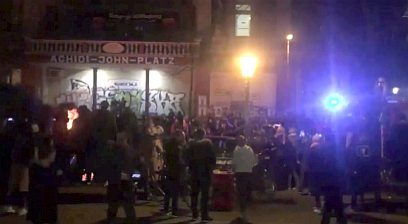 Several patrol cars immediately arrived. As a precaution, a group of a hundred was alerted, too. Several minutes later the firefighters were also given the alarm: trash cans had been set on fire.

But a police spokeswoman gave an all-clear: according to her it was only about 150 Kurds celebrating their New Year festival there.

A video of the festivities: