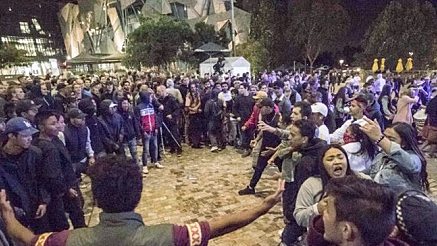 The White Night festival is held annually in Melbourne in the second half of February. It’s the middle of summer there, and the city sets up all kinds of art- and culture-related events in the downtown area that go on all night.

This year the White Night celebration became so culturally enriched that police had to act decisively to prevent a major riot. Serious injuries seem to have been avoided, although one young woman was reportedly stabbed.

An Australian reader sent us a tip about the article below, plus the following observations:

These gangs have actually been rampaging around the outer suburbs for years, but now feel they can come into the middle of the city and take over. The Islanders and the Muslims/Africans have been having violent battles in the outer suburbs for a long time. My son has Maori friends and they told him about it. Now that it is in the middle of the city, everyone knows about it which is a good thing — before we could all pretend it wasn’t happening, as it wasn’t on the news.

The violent home invasions have raised it to a new level, as they can be anywhere now.

Our socialist government in Victoria has enabled it by not enforcing the law, not locking people up, letting everyone go because they didn’t want to build a jail, letting them sell scrap metal for cash (outlawed in New South Wales, which means car theft is much lower there). The populations are similar, NSW vs Victoria, but the government policy is different. NSW police chase car thieves; ours don’t. The list goes on and the crime wave gets bigger.

The father of a criminal rang up talk back radio and said his son has been locked up in NSW for something he would have been let out on in Vic, and the police there told him, “You’re not in Victoria now.” It’s terrible, and still 29% vote for them. I think they would vote for a pig in a suit if it was running for the Labour Party.

Two years ago this was worrying me, and I started reading overseas news, as I thought this was going to make the place a hellhole, but everyone else has been stupid, too. Only Eastern Europe has any brains. Russia and China will win this war without firing a shot.

I would have left here if my partner did not have a lot of family and his own business, and I make more income here which I could not do elsewhere. If things change I will be out of here.

The article from The Herald Sun is behind a paywall, but here are some brief excerpts:

AN ugly confrontation between rival troublemakers at Federation Square, which marred White Night celebrations, had been planned.

But police thwarted a possible large-scale riot with the aid of a new $15 million hi-tech crimefighting hub.

The monitoring and assessment centre, which opened only weeks ago, gives officers real-time access to intelligence and to live CCTV feeds.

Two groups of youths, mostly aged 14 to 19, had been communicating via social media in the lead-up to the standoff early on Sunday.

Police seized knuckledusters, knives and a baseball bat, and one youth was caught with pepper spray.

The unruly group, which included young women, abused police during a standoff which began about 1am and continued for almost two hours.

A 17-year-old boy was arrested and is expected to be charged on summons after police found a baseball bat.

About 10.20pm, in an unrelated incident, a woman, 21, was stabbed in the toilets of Southern Cross station. Three female teenagers of Asian appearance were being sought.

About 550,000 people packed the city for the all-night festival, and police were pleased with overall behaviour: 21 people were arrested for alcohol, drugs, assault, criminal damage and weapons offences.

Daria Jehani, 18, told the Herald Sun a young man of African appearance grabbed her new iPhone and bank card from her back pocket at the corner of Flinders and Swanston streets about 8.40pm.

“It upset me so much. I didn’t feel safe at all. I felt quite scared,” Ms Jehani said.

“I work so hard for what I have and … they don’t work hard for anything they get. They just steal and deal drugs.”