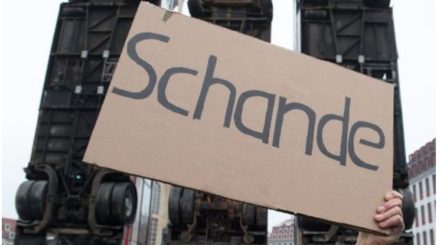 Three junked buses were upended in front of a church in Dresden as a work of “art” and a symbol of… Well, a symbol of something or other, something high-minded and progressive and multicultural.

Whatever the ostensible meaning of the exhibit was, the city fathers of Dresden really screwed up, because it turns out that the three ugly vehicles had a not-insignificant connection with a hardcore Islamic terrorist group in Syria.

Many thanks to Nash Montana for translating this article from Politically Incorrect (which is back up):

On Tuesday three junk buses were planted in front of the Dresden Frauenkirche (church), in the name of art. In honor of the art installation, the press and the dhimmi Dresden Mayor Dirk Hilbert and his minions were ecstatic in their agreement about the way a Syrian could bring Aleppo to Dresden. The citizens protesting against this however, were of course vilified as right-wing radicals. And now after PI and Pegida created a ruckus, the general back-pedaling has begun. PI reported that the barricade in Aleppo 2015, which this “monument” evokes, was not created by the populace is their search for safety, but by the second-most dangerous terror militia after the Islamic State, the Ahrar ash-Sham terror militia. Dresden is therefore paying tribute to Islamic terror. And now the Sächsische Zeitung as well as tag24.de are reporting about this.

Pegida leader Lutz Bachmann immediately announced that he would proceed with legal action. As PI learned from a well-informed source, they now want this whole affair to disappear from the spotlight as quietly and as quickly as possible by any means.

The Syrian “artist” Manaf Halbouni claims he didn’t know that the terror militia Ahrar ash-Sham was behind the bus barricade in Aleppo, since he of course rejects all violence, according to Halbouni. A glance at his webpage , however, leads to the conclusion that everything he says is simply a typical case of taqiyya. In 2015 he presented a piece of art under the name “What if”, which shows a “fictitious world” created by him. In this dream world of his, Europe is an Islamic colony:

[picture of map/maps he scribbled his Muslim Utopia on]

During my map project ‘what if’, I imagine an entirely different flow of world history.

In this fictitious world that I have created, the Industrial Revolution took place in the Arab as well as in the Ottoman Empire. Therefore two powers have emerged which have supplied the world with weapons as well as technological advances.

In the search for resources and new markets, the colonization of Europe began. During the colonization new borders were created in order to divide Europe among the two powers without any regard for the various existing peoples living there.

The following fight maps show the march of the troops and their various units as well as important military targets. The newly conquered European cities are either renamed or translated. Only a few larger cities are allowed to retain their original names.

All that has made its way to the ears of Mayor Dirk Hilbert. Good advice doesn’t just lie around on the street, but in this case maybe it does. Because conveniently, a photo suddenly appeared in which an oil spot is clearly visible under one of the buses:

[photo of bus and oil spot on ground]

As PI has learned, this oil spot will now, in the coming days, serve to save Dirk Hilbert’s hide. This way they can preempt a possible charge and remove the buses very quickly under the pretext of “environmental reasons”, and hope that Pegida and the annoying “opposition press” with their right-wing echo chambers will keep their mouths shut. One shouldn’t want to wish for too little, as an old adage says. Except Pegida isn’t going to make it that easy for the inept politicians and their water carriers in the media. The beauty is that even the Truth Ministry cannot just erase an entire day from the internet nor from the memory of citizens who can still think for themselves.

We are anxious to see how this circus in Dresden will play out. Basically it would be very easy to just take the appropriate steps and force all involved, with the circus director, er, Mayor Hilbert at the lead, to face the consequences and resign. We will not only not let grass grow over this, even if all the junk including the oil stain were to be gone by tomorrow; on the contrary we will be on this as long as everything about it has been uncovered, including the cost, and we’re sure Pegida will do the same.

A second PI article, also translated by Nash Montana, on the “terror buses”:

Ex-Muslim Imad Karim: “What exactly is the reason for these ugly buses in this particular location?”

This “monument” by Manaf Halbouni should only have one function, and that is to remind Germans to finally send such “monuments” to hell. Germany, Dresden and the people here have absolutely NOTHING to do with this ongoing 1,450-year-old Islam vs. Islamic barbarian war. It’s enough! The event in Dresden, showing symbols used by Ahrar al Sham and other Islamists, are just another ‘modern’ attack on Dresden.

The masochistic tendencies of Germans are beginning to disgust me. What exactly is the reason for these ugly buses in this particular location? Nothing, absolutely nothing! The artist should put his buses in front of the Saudi embassy, then he would show bravery, and not here in this place that has been a place of freedom for the past 70 years and that is continuously abused by the filthy left, the poisonous Greens and the devout CDUers and other sympathetic losers.

I know what I am talking about, because I am half Syrian and half Lebanese, and as an agnostic due to an Islamic background, I’m telling everyone: Stop treating Germany, the home of my values, so disrespectfully. These ugly buses and their “art connoisseur” admirers represent the pinnacle of cowardice and hypocrisy.

28 thoughts on “The “Terror Buses” of Dresden”