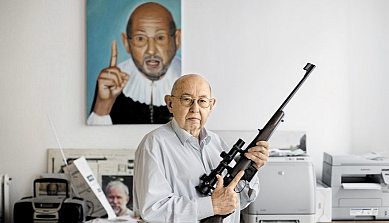 An Austrian gun rights advocate named Georg Zakrajsek has been convicted of incitement for posting “Muslims have declared war on all of us” on his website. He has been sentenced to five months in prison, but is free pending his appeal.

This is one of those cases that makes me want to say, “Pick your battles.” In the USA, of course, what he wrote would not have been illegal and would never have prompted a prosecution (although if Hillary Clinton had been elected president, all that could have changed). And his firearms advocacy wouldn’t have been such an issue, since we have the Bill of Rights here — advocacy for the Second Amendment is commonplace.

But Mr. Zakrajsek lives in Austria, and claims to be familiar with Austrian law. He must have known that what he said was fully actionable under the current statutes. Yet he chose to risk public opprobrium and prison anyway, not to mention discrediting Counterjihadists among his countrymen.

This case is troubling for two reasons:

There was never any doubt that he would be charged and found guilty under current laws. By appealing the verdict he is making a fool of himself. There is little to no chance he will win an appeal. The law is very clear. Period. Like it or not.

Zakrajsek said he is knowledgeable about the law. Thus he should have known that the incriminated sentence would ultimately lead to a conviction.

Many thanks to JLH for translating this article from ORF:

The weapons lobbyist Georg Zakrajsek was conditionally sentenced Tuesday to five months imprisonment for incitement. He appealed, so the decision is not legally valid.

Georg Zakrajsek, general secretary of the syndicate Liberal Weapons Rights in Austria (WÖ), has a website. In December 2015 he posted an essay which said, among other things: “Muslims have declared war on all of us and are already conducting it. Our traitorous politicians are firmly on their side. They are furthering and facilitating terrorism. But we will lead the struggle against it.”

Two weeks before that, the 77-year-old had posted another passage which disparaged Muslims and included a call to self-defense. The Greens submitted a description of the facts of the case to the state prosecutor’s office in Vienna. The trial took place, but the Supreme Court allowed an appeal against the charge of incitement.

In what appeared to be a packed hall in the Viennese criminal court, the weapons lobbyist defended the condemned comments: “I regard what I said as right. Why should I not write it? The reason for it was the terrorist attacks. Proponents of Islam were at work there,” Zakrajsek pointed out.

In concluding, the judge stated: “The charge of incitement is justified by the facts of the case. It consists of unacceptable words against a religious community.” In determining the sentence, the defendant’s previous integrity was considered as an mitigating factor. The multiple instances of commission of the act, on the other hand, were considered as an aggravating factor. He was sentenced to five months in prison. The decision is not [yet] legally valid.