This is one of those rare occasions when a translator makes the effort to translate a video, and Vlad does the subtitling, but I decide not to post it. In this case, the video in question is so abominable that I have declined to give it any air time here. However, since the clip is discussed in the translated material below, here is a link to the video in question.

This wonderful video is a complete validation of Godwin’s Law. You don’t have to wait for it — the evocation of the Austrian Corporal kicks in from the very start. When Donald Trump is the topic, it’s Hitler-Hitler-Hitler, all the way down!

This “humorous” monstrosity was created by German state television (is there any other kind in Germany?) at the taxpayers’ expense. Some Germans — notably a prominent Jewish organization — have taken exception to this particular invocation of the shade of Der Führer.

Nash Montana translated both texts below, as well as the text used in the subtitles for the video. 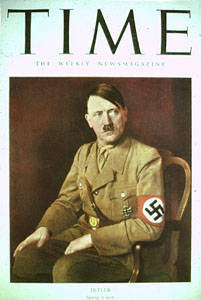 On January 24th ZDF’s “Frontal 21” presented a typical lynch-media contribution regarding the newest bogeymen of all leftists: US president Donald Trump. But this wasn’t just one of the usual and daily hate-filled small-minded contributions that was after another hair in the soup, another wrong dance step, or another mismatched tie of the new man in the White House. No, this time the brainwash-training channel went one step further, and maybe they went one step too far. In their report “Messiah or Hitler”, which we are supposed to understand as satire, Donald Trump was put in direct comparison with Adolf Hitler.

No one is laughing anymore, from the blackest of black-humored Brits to the most moronic fan of weak jokes, after an all-in-all dumb video contribution by the authors Werner Doyé and Andreas Wiemers. This irreverent piece just could not be surpassed. That’s exactly how the publisher of the Jewish Review (Jüdischer Rundschau), Dr. Rafael Korenzecher, sees it, and that’s why he not only wrote an open letter to the ZDF, but he also forwarded the report directly to the US authorities.

Open letter to Herr Kurt Beck, chairman of board of directors of the ZDF

Allow us to forewarn you that we deem your contribution on ZDF’s “Frontal 21” from January 24th, 2017, about the newly elected US president Donald J. Trump as defamatory.

With suggestively trimmed video material and accompanying words the entire program about the President of our most important ally and the most important Western democracy was manipulated to produce a prima facie resemblance to Adolf Hitler.

This is not only against the law and extremely defamatory, but it also trivializes the historical assessment of the unprecedented crimes committed by this German war criminal and those responsible for the murder of six million Jews.

We are bringing this incident to your attention because we assume that you missed the broadcast of this deliberately false narration, and that therefore no action has been taken in the exercise of your political and ethical responsibility regarding to the content of broadcasts of this institution of the public broadcasting corporation.

With all due respect for the absolutely indispensable democratic bestowal of freedom of the press, we are of the conviction that the irresponsible propagation of historical falsehoods and defamatory content should not be part of the contributions of the public broadcasting corporation ZDF. We therefore await an appropriate and suitable initiation of a public rectification of this scandalous issue, and we expect a long-term guarantee that a repeat of such incidents in the future will be efficiently prevented.

As a matter of form, allow us to point out that we have forwarded the information about this outrageous behavior of the “Frontal 21” editors to the appropriate US authorities, and have therefore made it possible on their part to consider the potential for an initiation of criminal procedures against the responsible parties.