As reported in last night’s news feed, a young man went on a rampage in downtown Melbourne yesterday, driving his car into a crowd in a pedestrian mall. Four people were killed and at least twenty injured before the car crashed and the driver was shot and wounded by police.

The alleged perpetrator is a 26-year-old Australian named Dimitrious Gargasoulas. Based on the news reports, Mr. Gargasoulas really is mentally ill — his Facebook ravings sound psychotic, even schizophrenic. He has a long rap sheet that includes violence and drug offenses. Just before he went on his vehicular rampage, he reportedly stabbed a man — identified in some reports as his brother.

So it doesn’t look like jihad. On the other hand, there was one eyewitness who described what the driver was shouting out the window of the car as he did doughnuts in the middle of the street just prior to driving his car into the pedestrians:

(Many thanks to Vlad Tepes for uploading the above video.)

I’ve often said that psychopaths are drawn to Islam like a moths to a flame. In this case, he seems to be a meth-addled schizophrenic psychopath. Or, as Vlad put it earlier, the guy is “Islam-tinted crazy”.

So not a convert to Islam, and not a standard act of jihad, but still…

There are more hints in his Facebook rants. Our long-time Australian reader Salome sent us a batch of material from one of Dimitrious Gargasoulas’ Facebook pages. She said:

The perpetrator, Mr Gargasoulas, has been maintaining a couple of Facebook pages, which include strange and portentous confused quasi-religious rants IN ALL CAPITAL LETTERS. 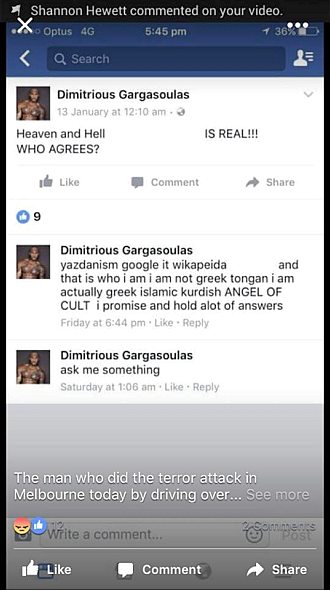 The link to the image is here. I fear lest pages get disappeared overnight.

It would appear he’s trying to represent himself as some sort of Yazidi, as well as a Greek and a Muslim.

One of his Facebook pages is here. [Or rather, it was there. It seems to have been taken down.]

Thinking. About what to do with them lol

Heaven and Hell IS REAL!!! WHO AGREES?

TODAY THE GODS HAVE GIVEN ME WISDOM AND KNOWLEDGE. THEY HAVE AWOKEN ME. I HAVE MY ANSWERS ALSO VISION OF A FUTURE THAT IS CLOUDED THE WORK OF SATAN TO FACE ME AND FAIL OVER AND OVER AMUSES ME RATHER THAN SHAKE ME TO THE GROUND. KEEP IN MIND GOOD WILL ALWAYS PREVAIL OVER EVIL AND THAT IS EXACTLY WHATS TO COME IN THE FOLLOWING DAYS WEEKS AND SO FORTH SOMEBODY TRIED TO ME…. WELL THAT SOMEONE IS ABOUT TO FIND OUT HOW TO DO IT PROPERLY AND 1 THING ILL TAKE YOU ALL OUT JUST ME YOU NEED A ARMY TO TAKE ME AND SO FAR YOU HAVE PRESENTED HALF A ARMY ARMY OF USELESS WAIT UNTIL YOU SEE MINE! FOR ALL THOSE WHO KNOW ME… KNOW IM A GENUINE GOOD SEXY YOUNG GUY. AND THAT IVE EXPERIENCED DAYS AND NIGHTS I THOUGHT ID NEVER EXPERIENCE IN MY LIFE SINCE I GOT TO MELBOURNE WELL GUESS WHAT… IVE BEEN BLESSED… AND NOW YOUR ED

The next time you hear of a police officer being killed “in the line of duty,” take a moment to consider the very real possibility that maybe in that case, the “law enforcer” was the bad guy and the “cop killer” was the good guy. As it happens, that has been the case more often than not throughout human history.

Below are excerpts from a detailed article about Mr. Gargasoulas published by News Corp Australia:

THE man who allegedly drove a car through a crowded Melbourne shopping district on Friday, killing four and injuring at least 20, claimed to be “god himself in a human bodily form” in a series of unhinged Facebook postings leading up to the attack.

Windsor man Dimitrious “Jimmy” Gargasoulas, 26, originally from Coober Pedy in South Australia, posted a Facebook message on January 1 declaring that, “Illumamati are a whole bunch of dogs … I found out”.

Four were killed, including a man and woman in their 30s and a 10-year-old child, when a car driven by Gargasoulas ploughed into Bourke Street Mall, which was packed with people. Fifteen others were seriously wounded and the city plunged into chaos as emergency services rushed to help the injured and secure the scene.

In the hours before Friday’s atrocity, Gargasoulas is alleged to have stabbed his brother in the suburb of Windsor, taken a female hostage, and led police on a chase through central city streets.

Details about his life have begun to emerge — and it would appear his troubling online outbursts began to worry even his friends.

The News Corp article has much more in it, including some or all of the Facebook texts quoted above.

16 thoughts on “Vehicular Jihad in Melbourne?”