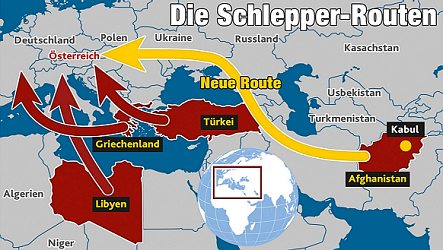 About a year ago the principal route for the migration into Europe was closed off, thanks largely to the efforts and leadership of Hungarian Prime Minister Viktor Orbán.

Until 2015, the largest flow had been across the Mediterranean from Libya and Tunisia to Lampedusa, Malta, Sicily, and the southern coast of the Italian mainland. Migrants had been prevented from crossing the Aegean from Turkey to the Greek Islands — a very short voyage — by the actions of the Turkish coast guard, which would catch and return the boats. But in 2015 Turkish President Recep Tayyip Erdogan decided to change his policy (for reasons that can only be speculated about — we’ve made some informed guesses here), and stopped the interdiction the smugglers’ vessels. The traffickers seized the opportunity, and started carrying hundreds of thousands of migrants from Anatolia to Lesbos and Chios.

The rest of the story is familiar: The Greek government ferried the arrivals to the mainland, where they stayed in camps until they could be picked up by buses and taken to the Macedonian border. From there the process was repeated at each successive border — get out of the bus or off the train, walk across the border for the photographers, and get picked up by the next bus or put on the next train.

At first the route led through Macedonia, Serbia, and Hungary to Austria. However, the Hungarians were alarmed by the chaos, filth, disease, and crime that came along with the migrants, so Mr. Orbán ordered the border to be closed as fast as possible. From then on Hungary became an obstacle to the migrant transports, and the route shifted to the west, through Croatia and Slovenia, to get to Austria.

After sustaining considerable damage from the migration, the Austrian government belatedly realized the necessity for its own border controls, and put up fences and crossing stations along its border with Slovenia. This caused the traffic to back up all the way along the Balkan Route, and one by one the other countries on the route shut their borders. The migrant flow eventually slowed to a trickle, and many thousands of immigrants were left stranded in huge reception centers on the Greek mainland.

As 2016 progressed, one could observe the main flow of the migration return to the passage across the Mediterranean from Libya to Italy. The migrants crossing from Libya to Italy are “rescued” near the North African coast and brought safely to Europe. The boats that pick them up — in addition to those of the Italian coast guard and Frontex vessels — are in the service of various “humanitarian” NGOs. At least some of those groups, but by no means all, are being financed by the Open Society Foundations and its subsidiaries.

However, the Mediterranean is not the preferred route — it’s longer and more difficult to use, hence more expensive. The route from Anatolia across the Bosphorus is much better, from the traffickers’ point of view.

Traffickers are now packing their clients into the cargo compartments of trucks and shipping them to the Balkans. From there they have to use various criminal stratagems to get them further into Europe — presumably forged documents, bribed customs officials, bogus bills of lading, and so on. To facilitate the transport, one would expect them to turn to the mafias, who have decades of experience smuggling contraband along those routes, and could get these loads of migrants into the Schengen Zone.

Somebody is paying for all of this — it’s an expensive process — but it’s not clear who the paymasters are.

The following article was published last May in the Kronen Zeitung. It describes a meeting in Afghanistan attended by representatives of a consortium of organized crime groups to discuss alternative routes for trafficking migrants into Europe. The preferred detour seems to have been a new northern route across Georgia, Ukraine, and Poland. I haven’t read any news stories about migrant transports being interdicted in any of those countries, but that may just mean that the smugglers have been largely successful — unlike those who use the route through Bulgaria and Romania, where shipments of migrants have been prominently blocked.

28 bosses of the largest illegal immigrant smuggling organizations in the world met in the Afghan capital of Kabul — and were intercepted by European intelligence agencies. The confidential report about the plans — and woes — of the people smugglers is available to Krone: New waves of migrants are planned to reach us in Austria via a new eastern route; the smuggling mafia plans to increase their profits.

Even the biggest 007-fans deride a summit like this: two dozen criminals meeting at a location and discussing their machinations and margins seems unrealistic.

[Graphic 2 (not shown): Recently, for this purpose, a coordination meeting took place with Afghan and foreign representatives of several human smuggling groups (12 from Afghanistan, 4 from Greece, 3 from Iran and Thailand respectively, 2 from turkey, Bulgaria and India respectively). Photo: AP/Gregorio Borgia, Krone]

In Kabul the Human Smuggling Mafia accordingly discussed the current crisis of their business model: twelve bosses from Afghanistan, four from Greece, three from Iran and Thailand respectively, two each from Turkey, Bulgaria and India, mourned the decline of their income — the border fences in Macedonia, Austria, Hungary and Bulgaria being “a problem”.

These are the most important points from the intercept log:

The mafia bosses debated better ways to share the costs of bribing the border patrol officers in the Balkan countries.

[Photo 3 (not shown): The paramount goal remains to bring illegal migrants with forged papers into the European target countries. To further that end, explorations are currently being undertaken for possible alternative routes via Georgia and Eastern and Southern Ukraine. Photo: AP/Gregorio Borgia, “Krone”]

[Photo 4 (not shown): One aim being to bring more women into Europe and to increase effectiveness of the routes in general by shortening the general travel time to three weeks. Photo: AP/Gregorio Borgia, “Krone”]

[Photo 5 (not shown): It is still open which smuggling organization is to provide for the bribes at the several borders. Further, the question is up for debate on the extent to which guarantees for reaching the target country can be satisfied. Photo: AP/Gregorio Borgia, “Krone”]

[Photo 6 (not shown): The current decreasing numbers of illegal migrants from Afghanistan in all probability do not represent a lasting trend. The latest European measures prevent a mass onrush like in autumn 2015, but the ongoing strong desire for escape, and the extremely well-organized smuggling gangs make a significant increase in the number of illegal migrants from Afghanistan likely. Photo: AP/Gregorio Borgia, “Krone”]

Austrian government circles confirm the authenticity of the report: “Thanks to this Operation by the Intelligence Agencies, we now know that our national measures for protecting the borders were important and justified.”