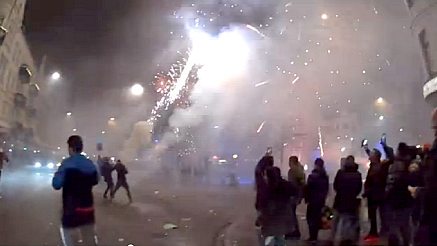 New Year’s Eve in Sweden seems to have been even more culturally enriched than in Germany, with the celebrations approaching open warfare in some locations. In Malmö, the southern Swedish city now dominated by Muslims, the preferred weapons were commercial fireworks, fired horizontally into crowds of revelers.

Many thanks to Tania G. for translating this article from the Swedish public broadcaster SVT (Sveriges Television):

Rockets fired at people, houses and cars. But the situation in Malmö is far from unique — alarms have been raised around the country about fireworks attacks.

That rockets are aimed and shot at people, houses and cars here at Möllevångstorget in Malmö has become a tradition in recent years, says Mathias Nilsson, Police Director of Operations for the New Year’s Eve celebrations in Malmö.

The fireworks are shot more horizontally, rather than up in the air.

How are the police tackling this?

“It is difficult for us to act precisely at midnight. It is extremely crowded and the noise is deafening. We ourselves, with our uniforms and cars, are targets,” says Mathias Nilsson.

Police had plenty of resources during New Year’s Eve, but no one was arrested for the reckless endangerment of another. Mathias Nilsson has a hard time seeing that an even larger police operation would help the situation, but he notes that he heard many Malmö residents say that the firing of fireworks should be banned altogether.

Jash Doweyko-Jurkowski, who made the recording from the square that is now spreading in social media (video), describes the event and the traditional New Year celebrations that take place on Möllevångstorget every year:

“This New Year’s eve celebration has become notorious for the very chaotic mood with people shooting fireworks haphazardly. People are prepared more or less for what will happen. It was sometimes panicky but overall there was a good atmosphere, he says.”

Most shoot up into the sky, but there are some individuals who shoot into the crowd. The film shows a woman who gets fireworks inside her shoes. She burns her foot and falls over.

A Matter of Upbringing

Altogether Jash Doweyko-Jurkowski filmed around an hour and a half of the New Year’s celebrations and then edited together the most dramatic images. He is also disappointed with the way the clips are being used to spread hatred.

“They claim that it has to do with ethnicity, but this is about personal responsibility.”

Jash Doweyko-Jurkowski thinks it is a matter of upbringing.

“I was raised to respect my fellow human beings and everything that has a fuse. We learned very early that you do not behave however you want. Eyes, face, hands are very vulnerable.”

According to Emma Cronberg, the national police chief, the events in Möllevångstorget are far from unique. She describes it as an unfortunate development — a few years ago there was nothing like this at all.

“It’s terrible. It is about much more than shooting at a police officer. It is symbolic, and I’m concerned about why they do things like this to the community. When they use violence against the police and the rescue services, the citizens are usually doing violence against themselves. I see it as a self-destructive behavior that is now underway.”

The Root of the Problem

Above all it is about certain areas in big cities and, according to the police; this is the same type of behavior as stone-throwing and setting cars on fire. Several places are now demanding more stringent legislation. The Police Union welcomes the review of current legislation, but Emma Cronberg does not think restrictions or prohibition of the sale of fireworks will be enough.

“It is a symptom of a society that is not well. It must be approached in several different ways, and you have to get to the root of why it occurs. During certain periods, we have stone-throwing; during others cars are set on fire. There is a restlessness in our society.”

Shooting rockets in Malmö is not unique. In West Region alone about fifty reports came in from the police about incidents in which young people had shot rockets at police and rescue services while they were tending to emergencies at housing estates and public transport.

Amongst other things, a youth gang lit fireworks on a bus in Gothenburg, and in Borås a four-year-old was shot with fireworks.

In Gavle, the police received several alarms about serious fireworks incidents during the weekend of New Year’s Eve. Amongst other things, a rocket was lit inside a store.

14 thoughts on “The Rockets’ Red Glare in Malmö”