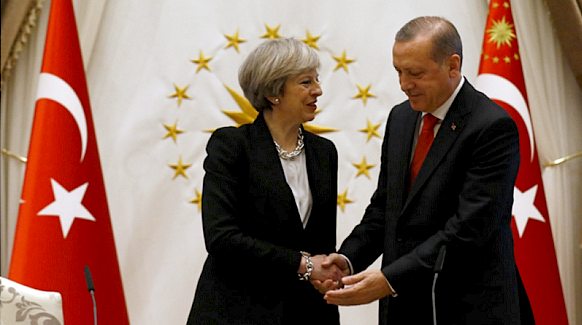 After meeting with President Trump in D.C., Prime Minister May jumped on a plane for Ankara, where she cut a deal with Turkish President Recep Tayyip Erdogan for the development of fighter jets. British development, that is, of jets for the Turkish air force.

Mr. Trump seems to have scaled back his earlier skepticism about NATO after meeting with Cousin Theresa. He has reassured NATO allies of his commitment to the alliance.

Whether that means he will just have to bite his tongue and put up with Papa Erdogan’s shenanigans remains to be seen.

Here’s the report from Sky News:

Theresa May has announced a £100m deal for the development of fighter jets for Turkey, following trade talks with President Recep Tayyip Erdogan.

Speaking after discussions with Mr Erdogan in Ankara, Mrs May said Britain and Turkey will “prepare the ground” for a post-Brexit trade deal by setting up a joint working group.

It came as the UK-based BAE Systems and Turkish Aerospace Industries signed a Heads of Agreement document establishing a £100m partnership for the continued development of the Turkish Fighter Programme.

Mrs May said: “We both want to build on our existing links and I believe that doing so will be to the benefit of both our countries and for the prosperity of both our nations.

3 thoughts on “Speaking of Cousin Theresa…”