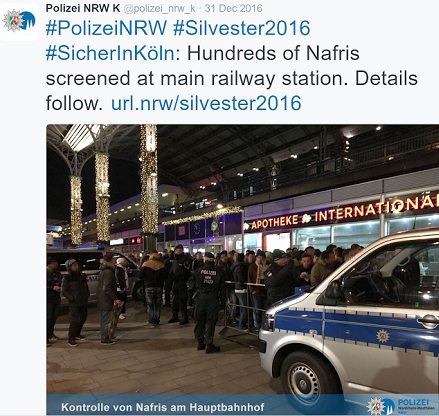 Last night — New Year’s Eve — was Silvester Night in the German-speaking parts of Europe. The mass outbreak of the Groping Jihad in Cologne and other cities last year caused a ramping-up of security for this year’s festivities. As a result, there were fewer reported instances of sexual assault and other offenses by culture-enrichers.

The increased security came at a price, of course: there were ten times as many police deployed on the streets of Cologne as last year. Given all the additional equipment, cop cars, and paddy wagons, can you imagine how much that must have cost? And they will need even more next year, because more “refugees” will have been welcomed into the Welcoming Culture by then.

How long can the German state sustain this before it goes bankrupt? How much are the Germans willing to pay to be kept safe from groping, raping, assault, murder, and being burned alive?

Nash Montana has translated four summaries from Politikstube of the Sylvester enrichment news from Germany and Austria. The first one concerns the crackdown on North Africans in Cologne and other cities last night. The slang term for a Maghrebin is “Nafri”, and you’ll notice that even the police use it in their official social media posts (see the screen cap at the top of this post):

This is the current tally for Cologne — the real tally will have to wait a few more days — two sexual attacks, six arrests and hundreds of expulsions from the area. The police controlled [stopped them and asked for ID] about 1,700 people, most of whom looked Arab, at the Cologne train station. One train with 300 North Africans was stopped in Deutz.

In Dortmund, Essen, Münster und Düsseldorf groups of North Africans also showed up. 1,200 of them gathered in Frankfurt, and Hagen reported similar numbers. Nationwide, about 25 sexual attacks have been reported up to now.

It is clear: Without the massive police presence, many towns would have seen the lights go out and the mass sexual attacks and rapes would have reached a new record. Additionally, there’s this paradox: the police have to protect the indigenous people from those who came here to seek protection — people who show up in battalion strength in order to show just how much they respect their host country. 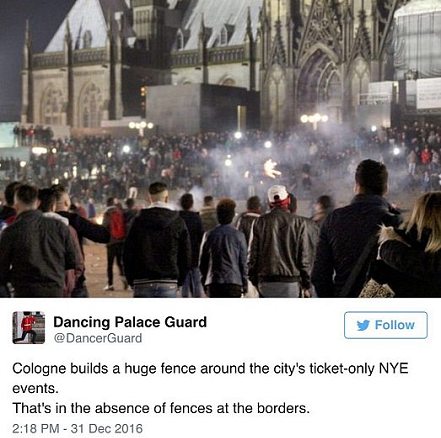 Until now only 1,300 people had to be controlled by the 1,500 policemen in Cologne, who after having been stopped at least once before, were then let go to come back and try again. What’s going to happen when 5,000 or even 10,000 of them gather?

Focus Online and Die Welt reported about this more extensively.

The second summary concerns the aggressive use of fireworks in Reutlingen (the city where the female Polish restaurant worker was killed with a kebab knife last summer):

Reutlingen: Pakistani shoots at passersby and police with fireworks

On the Marktplatz in Reutlingen a 31-year-old Pakistani shot at people and police with a battery of fireworks. One policewoman as well as one female passerby were directly hit, but luckily they weren’t severely injured. While the 31-year-old was being arrested the other men in the Pakistani’s group were abusing the police verbally and attacking them physically. Only after more police came to help did the situation calmed down. Two more people with high blood alcohol levels were taken into detention because they refused to obey an order to leave from the area, and instead verbally assaulted the police.

And the news from Austria:

Preliminary result: According to the police in Vienna three sexual attacks were recorded within the city as well as in the district of Leopoldstadt. The victims are women from Germany, Romania and Italy, who were “mob danced” by five to six “foreign-looking men”, after which they were massively harassed, touched in their intimate areas, and kissed.

A police spokesperson stated that they are expecting further cases of sexual harassment and attacks in the coming days. 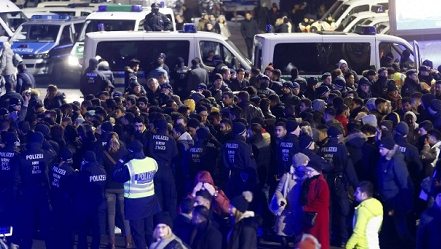 Finally, a report from Dortmund:

Not only in Cologne but in Dortmund as well, groups of young men predominantly from North Africa gathered in the city center and the situation became seething hot on Silvester Night 2016: Around 23:38 a spokeswoman for the Dortmund police reported to Ruhr Nachrichten that “a remarkable number of young men of North African descent were on the streets” and that there had been many expulsions from the area by the police against aggressive people. Which is why the police received more reinforcement personnel. And a few moments later it became obvious that the reinforcement came just in the nick of time.

About 1,000 people were gathered at that point at the Platz von Leeds between Brückstraße and Reinoldikirche. Almost without exception they were young men an Arab and North African migration background, as a series of photos from the Ruhr Nachrichten undeniably show.

These young men targeted the police and threw fireworks at them, the WDR channel reported. Rockets flew, the mob of people was aggressive, and the police had to step in against rioters again and again. Offenders were pulled out of the group and detained and arrested. Pictures show how hundreds of helmeted policemen faced a hectic situation; they were clearly undermanned.

In the middle of it all were many Syrians waving the flag of the terror organization “Free Syrian Army” (FSA). According to the press they supposedly celebrated the ceasefire, but a video that the journalist Peter Bandermann published on his Twitter shows the threatening situation of a heated-up mob that was tightly surrounded by the police, who didn’t just wear the helmets but had the visors pulled down, in expectation of (further) attacks.

That the Dortmund Reinoldikirche, the church, was set on fire by fireworks, and that the fire department had to put out the fire, is only mentioned as a sidelight by the news.

More information is at the Dortmund Echo.

Peter Bandermann has a lot of pictures on his Twitter.

23 thoughts on “Silvesternacht 2016: Once More, With Groping”