The election of Donald Trump last November is widely seen as part of a “populist” (i.e. nationalist) trend that will also include political earthquakes in Western Europe. Based on recent polls, it looks like Trump Round 2 will unfold in the Netherlands on March 15, when parliamentary elections are held, with Geert Wilders predicted to score a major victory.

Our Dutch correspondent H. Numan sends this useful summary of the current electoral trends in the Netherlands. 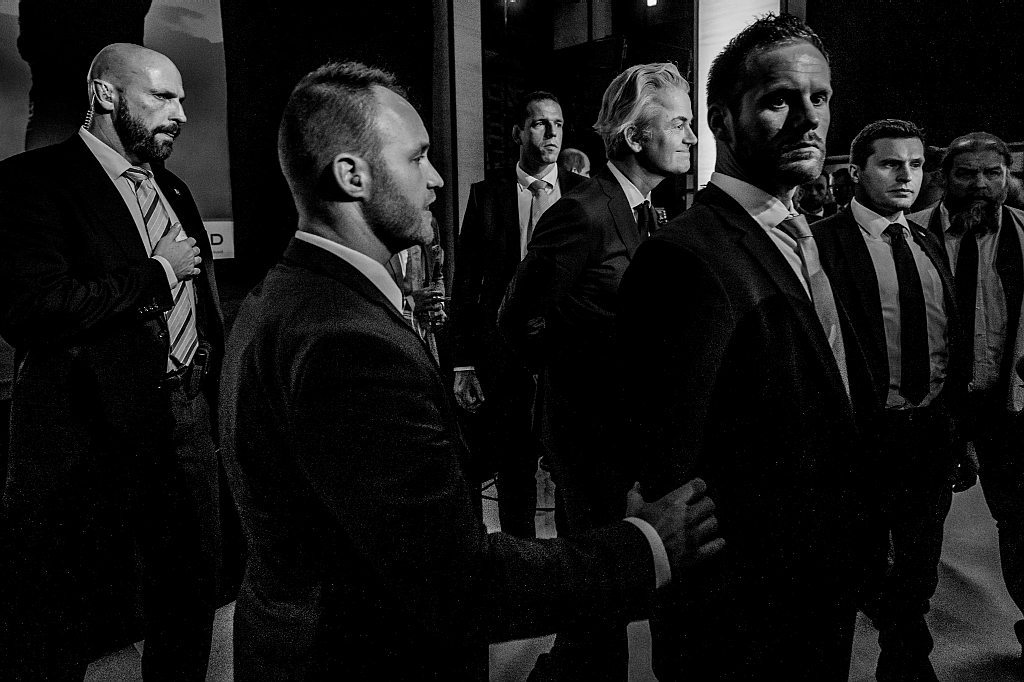 Let’s all boycott the PVV!

Folks, the elections are coming up soon in The Netherlands. On the 15th of March, to be precise. Just about every party is now boycotting the PVV, Geert Wilders’ party. The few that aren’t are under pressure to join the boycott. The media do everything possible to minimize the electoral damage. The polls are softly massaged in the desired direction. But I have good news for you: Wilders will win. Not only that, he will win by a landslide. I expect the PVV to trump Trump. Even the media grudgingly admits a victory by Wilders is almost a certainty. So… let’s all boycott the PVV, making that a hollow victory.

First, the most important question: how big of a victory will the PVV be able to achieve?

50 seats, maximum. According to the law, a party cannot occupy more seats in parliament than the number of candidates they submitted. The PVV list is 50 parliamentarians long; therefore they can occupy 50 seats in parliament, no more. I have no idea what happens if the electorate were to give them more. It has never happened.

Next, how does the Dutch political election process work?

Okay, it’s the 16th of March. The polls are closed, and the results are in. Tradition says that the winner of the elections can appoint an informateur (inquirer), or, if the polls are very tight or negotiations are expected to be difficult, a pre-informateur (pre-inquirer). Not that long ago this was a royal prerogative. The queen could appoint anyone she wanted, and didn’t have to explain why. A few years ago this royal prerogative was taken away and given to Parliament.

So, the chair will appoint someone to consult all parties, write down with whom they want to govern, with whom they don’t, and under what conditions. This takes a couple of days, and he reports back to the chair. Based on the results, further consultation will take place, until it’s reasonably certain a cabinet can be formed. Then the informateur becomes formateur: he will form a cabinet and become its leader as prime minister. It’s customary to appoint an elderly statesmen or politician to do this inquiring. When the negotiations are nearly finished, a new informateur will be appointed, who will be asked to become formateur. The whole circus can be over in a fortnight, but it can also take a full year. There is no time limit. In Belgium the record is 2.5 years.

Now the funny stuff. Calling for a PVV boycott is bull. A cabinet MUST be formed, and it must be formed based on the current results. Going to the ballot box over and over again until we got what we would like it to be is not going to happen.

So, let’s look a the polls. I’ll ignore the small fry, they have very limited effect anyway. This election a record number of parties are participating: 81 parties. It is expected the ballot form will be more than a meter in length. Most of them are small fry and most of them will not pass the grade.

These are the poll results from last Sunday: numbers on the left are what they currently poll in the lower house of Parliament; on the right the actual seats they hold in the Senate:

The VVD party announced today that they aren’t going to work with the PVV party. Okay, that’s nice to know. A coalition PVV-PVV-CDA would be, as of today, 73 seats. Not enough to govern, but only just. What nobody talks about is an alternative. After all, if these are the electoral results, a cabinet must be formed. Any other coalition is simply impossible. Do the math. Any coalition without the PVV would need support from an unwieldy large number of parties, and that is simply out of the question.

Please bear in mind that the PvdA, SP, GL don’t want to work together to begin with. And even if they did, they would need much more than that. An ultra-left coalition? Not possible. All left wing parties combined are smaller than the PVV alone. They would need many other parties to form a coalition, and that is not going to happen.

GL-SP-PvdA=37. Add D66 to it. Not enough, and D66 is highly unlikely to do that. Add D66 plus CDA=67. Still not enough. You need another 9 seats. That would be an impossible six- or seven- party coalition. Not only that, but the coalition members are diametrically opposed to each other and only united in their hatred for Wilders. Nothing else. Rest assured if CDA and D66 were to join such an idiotic coalition, simply to spite Wilders, that would be the last time they could do that. Next time they would be voted out of existence.

But the elections aren’t here yet. So there is time enough to ‘manage’ the polls. Last week the PVV lost one (virtual) seat, and one the week before as well. Why? No reason at all. Wilders didn’t say anything, nor the party did anything warranting the loss of any virtual seats. The VVD party didn’t lose any (virtual) seats. Why not? Plenty of reason for them to loose a lot more than two virtual seats. This poll-massaging is very subtle, but I do notice that people more and more openly question those polls.

Last week the news reported emerged the government crime figures are somewhat off. By a whopping five hundred percent no less. Yes, you read that correctly. The official crime figures are five times worse then reported. The VVD already lost the minister of justice and his junior minister. The present one is considered just about the worst we have had in the history of the country. Not bad, for a chap who hopped on for the ride and has not even been two years in office.

Nobody expects the PvdA to do better than 15 or maybe 18 seats. However, nobody talks about the drubbing the VVD will certainly get. The VVD presumably holds a virtual 23 seats, based on what? Prime Minister Rutte, the guy who said he will never form a coalition with Wilders in it, broke all his electoral promises. Not one, not many, not a lot. All of them. Surely that will be remembered on the 15th of March. I would be highly surprised if the VVD manages to get even 18 seats.

The question is not will Wilders win, but by how much will he win. The PVV social boycott will now very nicely work against the boycotters. Hang a PVV poster on your wall, and stones will fly through your window. Guaranteed. Say that you prefer the PVV, and you lose your job. Guaranteed. Nothing will be done about it. Also guaranteed. Therefore most people don’t say much. They don’t have to say anything. The only thing they need to do is go and vote… Exactly the same tactics were employed by the Democrat party in America, and they lost massively. Social pressure against the PVV is much worse in The Netherlands; take my word for it.

The media eagerly report that Wilders won’t be able to get anything done, if he is elected. Because what he proposes requires “changes in the constitution”. That is baloney. Why? Because those constitutional changes weren’t required when previous governments opened our borders. So Wilders can just as easily close them. Wilders won’t need to change the constitution to make the police do the work they get paid for. Just a kick in the butt will do nicely.

He doesn’t have to change the constitution to forbid the koran. We have a very nice piece of jurisprudence: the Arrest Goeree. In a nutshell, the High Court said you are fully responsible for your own actions. You cannot justify it by a religious book. If you say, ‘I hate gays/want to destroy Jews/disobey the law/marry toddlers, because my holy book orders me so,’ you can go to jail. You are responsible for your own actions; you can’t justify them based on a book. The Goerees were ultra conservative protestants, but exactly the same applies to any religion. Also mohammedanism. All Wilders has to do is inform the courts they have to enforce the law. That’s why (amongst other reasons) we have a justice minister. Nothing could be simpler.

Currently the government is sending a delegation to Morocco begging them to take back their own citizens who are being extradited. No, said the Moroccan government, not unless a lot of money comes with them. Tunisia and Algeria said exactly the same. The same states had exactly the same policy in the past. At that time they were called the Barbary Pirate states. Wilders doesn’t need to change the constitution to negotiate with them.

Wilders doesn’t need to change the constitution to forbid the building of mosques. In Holland we normally forbid not a lot. We merely ask them to apply for a proper license, which is impossible to get. So if you hear stories about prostitution being legal in The Netherlands: yes, that’s correct. But you need to register yourself as such in a municipality, and getting a license is not easy. Then you have to register yourself with the revenue department and make sure you obey all labor-related and safety laws, which is an impossibility. All Wilders has to do is check the building safety requirements, and most mosques can be shut down. They don’t comply to safety regulations. As for the others, a check by the revenue department where the money came from is probably enough reason to shut them down as well. Nothing unconstitutional at all.

So what constitutional changes are we talking about? None. Leaving the EU doesn’t require a change in our constitution, nor will reinstating our own currency. Our constitution wasn’t changed when we entered the EU and the Euro. If we could go in without changing the constitution, we can go out as well. I’ve said it before, and I’ll say it again: as soon as Europeans start whining about their constitution, beware! European constitutions are very different from the American constitution. Not a nice little list to memorize at school, but bone dry pieces of legislation. Yes, we have a constitution. That’s about all I know of it. That’s what 99% of the Dutch know about it too. It’s not a big deal here.