By now you’ve all heard about this afternoon’s shooting at the airport in Ft. Lauderdale. Five people were killed and eight others wounded. The suspect, who is now in custody, is named Esteban Santiago-Ruiz.

At first it looked like this was shaping up to be another “workplace violence” incident. The perp didn’t have a Muslim name. He had been in the military and was stationed in Iraq at one point. He has a history of mental problems. And he allegedly got into an argument on the plane during his trip from Alaska to Florida. 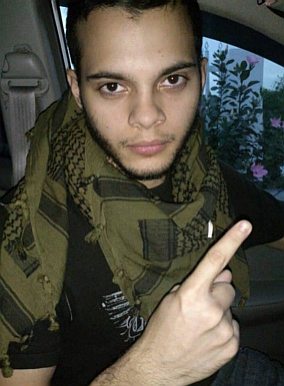 Maybe the picture is bogus — who knows? But if it isn’t, Mr. Santiago-Ruiz is definitely a convert to Islam, because he is making the unmistakable and notorious gang sign for the Islamic State: a single index finger pointing upwards, representing tawhid, the oneness of Allah.

There’s also a rumor floating around that he lived within walking distance of the only mosque in Alaska.

This is very much a breaking story, so I’m sure much more will be unfolding in the next few hours. I’m waiting to learn his Muslim name, which is bound to emerge sooner or later.

Here’s a recent report from the local CBS affiliate in Miami:

Police: Suspected Gunman Got Into an Argument During Flight

FORT LAUDERDALE (CBSMiami) — Federal law enforcement sources said the suspected gunman in a deadly attack at Fort Lauderdale-Hollywood International Airport got into an argument during his flight from Alaska to Florida.

They’re now investigating whether that’s what set off a shooting rampage that left 5 dead and 8 others wounded.

Esteban Santiago-Ruiz, 26, took a flight from Alaska to Florida Friday with a stop in Minnesota, officials said. Somewhere along the way, he got into an argument.

According to Broward Commissioner Chip LaMarca, Santiago-Ruiz arrived from a flight with a gun that he checked in.

“He claimed his bag and took the gun from baggage and went into the bathroom to load it. Came out shooting people in baggage claim,” LaMarca said.

Passengers are legally allowed to travel with guns and ammunition as long as the firearms are unloaded, secured in a lock box and not brought on board the plane as a carry-on. They must be declared to the airline at check-in.

Earlier reports claimed Santiago-Ruiz came in on a flight from Canada. On the company’s Twitter account, Air Canada confirmed that no one by that name was on their flight.

Santiago-Ruiz was born to Puerto Rican parents in New Jersey and recently became a father of a baby boy.

He also had military experience.

His aunt, according to nj.com, said after a tour of duty in Iraq, he “lost his mind” and was hospitalized at one point for mental health issues.

According to the Associated Press, the Pentagon said he went AWOL several times as a specialist during a stint with the Alaska National Guard and was demoted to private first class. He was given a general discharge, which is different from an honorable discharge.

In November 2016, he walked into an FBI office in Anchorage claiming that he was being forced to fight for ISIS and was sent to a psychiatric hospital, officials revealed.

Santiago also has a record for minor traffic violations and was evicted in 2015 for not paying rent.

31 thoughts on “Jihad at the Ft. Lauderdale Airport”