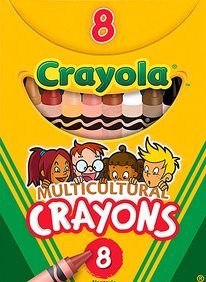 Does this mean there won’t be any more Multicultural Crayons in the European Union? Horrors!

Seriously — this ban on colored pencils and watercolors seems somewhat of an overstretch. But I’ll let the toxicological experts among our readers judge whether it is an appropriate regulation.

Many thanks to Nash Montana for translating this article from Bild:

New regulation madness coming out of Brussels: Many of the colored pencils, markers, felt pens, crayons and wax crayons, and watercolors can not be sold anymore in the EU!

Completely unnoticed by the public, the EU has drastically tightened the safety limit for lead in children’s toys.

The problem: Almost all children’s coloring products contain the filler Kaolin (hydrated aluminum silicate), and titanium dioxide. These are both minerals which are harvested from the earth’s crust; therefore they naturally contain nominal traces of lead which can’t be chemically removed. The ban mostly affects lighter color tones because they contain a lot of white pigment.

The EU assumes that — in the evaluation of the allowable concentration of lead — a child ingests 100 milligrams daily of said play material. But that would mean that a child eats 18 colored pencils a year!

Additionally: Many markers and colors are sold in sets, for instance coloring sets for schools. But even if only one color pencil in a whole set exceeds the prescribed lead limit, the entire set cannot be sold anymore, effective immediately.

CSU-EU representative Markus Ferber remarked: “It would be a lot better to get a grip on bigger problems instead of limiting the creativity of children.”