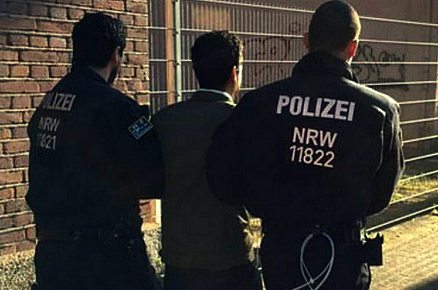 The 2016 crime statistics for Bavaria have been leaked to the press, and they do not bode well for the “Union” — the Christian Democrat (CDU and CSU) parties that govern Germany in coalition with the Socialists.

The following report from the Münchner Abendzeitung violates the “Press Code” by stating explicitly that migrants are responsible for the rise in violent crime.

More crimes are being committed in Bavaria. Upper Bavaria, and particularly Munich, note the highest increase.

The Crime Statistics were to be presented at the End of march. But the first figures have already leaked.
They should please neither Interior Minister Joachim Herman nor the police. The number of crimes has risen markedly in the past year.

Munich is particularly affected. The number of crimes in the city and in the county, compared to the year before, rose 6 percent, the Bayerischer Rundfunk reported this Friday. This is the highest increase in more than ten years. In the Munich section of police headquarters 110,000 crimes were reported.
In the area of the police headquarters for Upper Bavaria-South in Rosenheim, it was 52,000 crimes. This amounts to an increase of 8 percent.

Violent Crime and Drug Crimes on the rise

According to information from the BR [Bayerischer Rundfunk], experts ascribe the increase in Munich to several factors. One among them is, with an increase of 800 cases, the so-called “aggravated violent crimes”. According to police experts, more and more battery crimes are reported in or on the periphery of housing facilities for asylum seekers. According to the experts, in most cases both perpetrator and victim are from different ethnic groups accommodated there.

CSU is planning a security force: “Armed? Of course!”

Additionally, Munich sees — with an increase of 2,000 reports — a massive increase in fare-dodging and drug crimes. At least in part, Munich police attribute both to increased patrols.

In the area of the main train station, County and Federal police drastically broadened the screening of suspects. The number of asylum seekers among the arrested drug dealers increased, according to BR’s information.

In the city and in the county of Munich, burglaries increased as well. The increase compared to 2015 was 9 percent. It can mainly be attributed to Eastern European gangs, which attack whole districts of the town.

South of Munich, “aggravated violent crime” has increased, too, also in and around asylum seeker accommodations. Twelve percent more battery crimes were reported. According to the BR report the number of homicides increased from 54 in the year 2015 to 67 (increase of 34 percent). Experts ascribe the increase almost exclusively to violent rows in refugee homes.