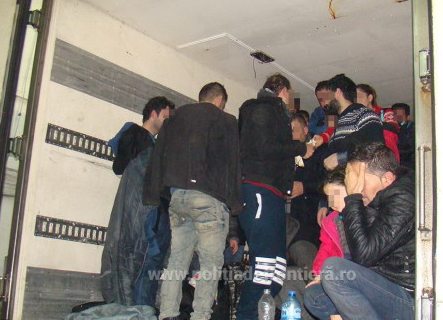 As reported in last night’s news feed, 48 Iraqi migrants were discovered in the back of tractor trailer traveling from Bulgaria to Hungary. They were detected at a customs station in Romania, and are now in custody in Bulgaria.

There are several things about this case (and other similar cases in the last few months) that cry out for more attention:

I don’t have any answers to these questions yet, but I’m paying close attention to the news stories as they appear. Thus far we have seen migrants stowing away on freight cars traveling across the Brenner Pass from Italy into Austria (with some of them freezing to death en route), in a truck crossing from Germany to Belgium, and in trucks traveling through the Balkans to Hungary and points beyond.

Many thanks to Stefan Cel Mare for translating this article from StirileProTV:

48 Iraqis found in a chocolate truck a Giurgiu customs point. Where did they intend to go?

On Friday police from Giurgiu customs discovered 48 Iraqi citizens who wanted to enter Romania illegally, hidden in a goods truck full of chocolate.

According to a press release from the General Department of Frontier Police, on Friday, at the frontier crossing point in Giurgiu, a Bulgarian citizen driving a truck registered in Bulgaria presented documents for the goods he was transporting — boxes of chocolate candy — with intention to cross through Romania to Hungary, as the final destination was a company in Hungary, according to documents.

Because of the risk factor, a Romanian-Bulgarian police team was formed and proceeded to do a full control of the truck, because the Romanian police detected a very high CO2 concentration in the goods compartment. In this way, the Bulgarian police were called, and with them the truck’s goods compartment was opened, and inside they discovered hidden 48 persons – 17 minors, 9 females and 22 males, the police report shows.

According to preliminary information, they are all Iraqi citizens, adults between 20 and 45 years old, and the youngest minor is only few months old.

During their interrogation the migrants declared they wanted to go to Hungary, and the driver of the truck did not know about the fact they were hiding in his truck. According to frontier protocol between Romania and Bulgaria, the Bulgarian authority received the migrants and the truck driver, with the obligatory condition to continue the investigation and to apply the legal penalties.

31 thoughts on “A Truckload of Chocolate Iraqis”