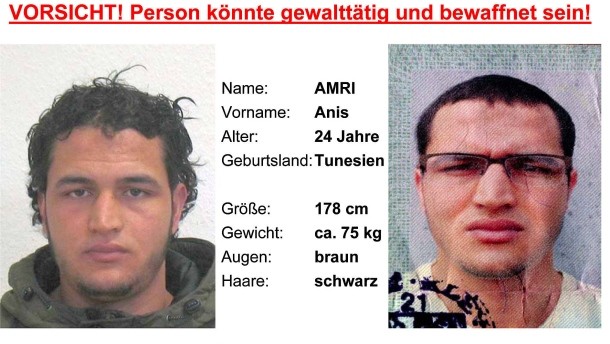 In the pre-dawn hours of this morning Anis Amri, the Tunisian mujahid identified as the man who drove a truck through the crowd at a Berlin Christmas market on Monday, was gunned down by Italian police at a checkpoint north of Milan. Mr. Amri was asked by police to produce his identity papers, and instead produced a gun, shooting and wounding a rookie policeman. The other officer returned fire, killing the suspect.

A couple of days ago, given the peculiar circumstances surrounding the identification of Anis Amri as the prime suspect, I predicted that the most likely outcome for the Berlin truck mujahid would be death in a shootout with police. That’s how it turned out, and now we’ll probably never know for certain whether there was anything hinky about the whole business.

In any case, however, Germans are safe from any further terror attacks, and can breathe a sigh of relief. Because there couldn’t possibly be any more stealth mujahideen amongst those millions of “refugees”, could there?

Many thanks to FouseSquawk for the translation, and to Vlad Tepes for the subtitling:

Below are excerpts from an article in La Stampa about the shootout in Milan that killed Anis Amri:

The suspect in the Berlin Christmas market truck attack was killed in a pre-dawn shoot-out with police in a suburb of the northern Italian city of Milan on Friday, Italy’s interior minister said.

“The man killed was without a shadow of doubt Anis Amri,” Marco Minniti said, referring to the 24-year-old Tunisian who is suspected of driving the truck that smashed through a Berlin market on Monday killing 12 people.

Minniti told reporters that Amri was stopped by two policemen at around 3 a.m. (2200 EDT) in front of the Sesto San Giovanni train station, north of Milan.

When he was asked for his identification papers, Amri pulled a gun and shot one of the two policemen, lightly wounding him in the shoulder. He in turn was then shot dead by the police.

“These two extraordinary, extremely young men, simply by doing their duty, have done an extraordinary service to our community,” Minniti said. One of the two policemen had only just started service and was on his trial period.

A judicial source told Reuters that police had a tip off that Amri might be in the Milan area and that additional patrols had been sent out to look for him.

A rail ticket found on Amri’s body indicated he had traveled by high speed train from France to the northern Italian city of Turin, the source said. Amri then caught a regional train to the Milan suburbs.

Minniti gave very few details of the police operation, saying investigations were still in progress. He added that there could be “future developments”.

6 thoughts on “Shootout in Milan”