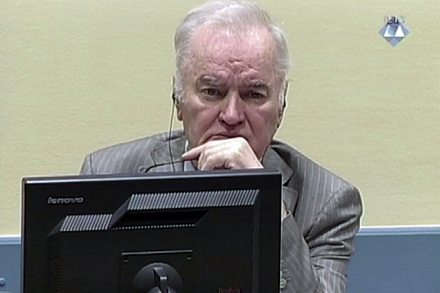 The civil war in Yugoslavia is now more than twenty years in the past, but the wheels of justice are still grinding up its “war criminals” in The Hague.

Ratko Mladić is a Bosnian Serb who is accused of masterminding the Srebrenica Massacre in 1995. After being on the run for fifteen years General Mladić was captured in Serbia in 2011. Since then he has languished in The Hague, and is now finally on trial. The proceedings are expected to last another year.

Many thanks to Ava Lon for translating this report from the Swiss daily 24 heures:

“Ratko Mladić is not a monster”

International Justice. The defense for the former military leader believes that he did his duty in protecting his people and his country in a time of war.

The former Bosnian Serb military leader Ratko Mladić is “not a monster” but a soldier, his lawyers pleaded on Friday. They believe that he should be acquitted of genocide, crimes against humanity and war crimes.

The 73-year-old former “butcher of the Balkans” is accused of “ethnically cleansing” part of Bosnia to create an ethnically pure Serb state. The conflict (1992-1995) killed more than 100,000 people and displaced 2.2 million people.

He is also accused of genocide for his role in the massacre of nearly 8,000 Muslim men and boys in July 1995 in Srebrenica. This was the worst in Europe since the Second World War.

“Ratko Mladić is not a monster; he was a soldier defending himself against the monster that was the Islamic war machine,” said his lawyer Branko Lukić at the beginning of a three-day plea before the International Criminal Tribunal for The former Yugoslavia (ICTY) in The Hague.

On Wednesday Prosecutor Alan Tieger demanded the life sentence against him. “The time has come for General Mladić to be held accountable for the crimes committed against each of his victims and the community he destroyed,” he said.

The prosecutor’s office accuses him of facts that occurred “even before he was in command” and tries to “confer on General Mladić superhuman proportions and capacities as if he were omniscient and omnipotent.” “Ratko Mladić is an accused, standing before you as an innocent man.”

It was “his duty to serve the army of his country to protect his people in a war prepared and waged against them, both locally and internationally,” he argued. For him, the former military leader is being prosecuted “because he is a Serb”. “This guilt is defined by ethnicity, rather than by acts.”

In his eyes, if one were to follow the reasoning of the accusation, every soldier in every war around the world should be found guilty. The prosecutor’s office wants to “ignore all the evidence that General Mladić was constantly seeking to put an end to hostilities,” Lukić said. “Ratko Mladić neither began nor extended the war.”

In the “self-defense war” he led which “did not seek to terrorize”, the former military leader asked for assistance from humanitarian aid agencies and ensured the protection of Muslim civilians, added the defense. The prosecution suffers from “a lack of real evidence,” said the lawyer Dragan Ivatić in turn. He believes the arguments are “weak and impertinent”.

The defense also reminded the court of what was “at stake”: “General Mladić’s ability to go home, spend time with his relatives and then die surrounded by his family, not in a concrete cage in prison.”

The judgment is expected by the end of November 2017.