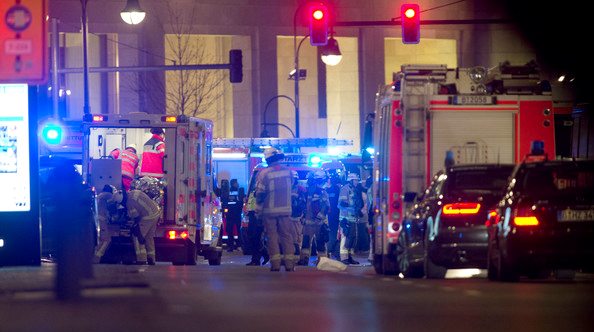 The latest official announcements from the German authorities indicate that the alleged Pakistani who was in custody last night was not in fact the man who drove the truck into the Christmas fair in Berlin, killing twelve people. The actual perpetrator is still at large, and is considered armed and dangerous.

From the Polish end of the story, the owner of the trucking company — who is also the murdered driver’s cousin — says that the driver fought back against his attackers, and that it would have taken more than one man to subdue him.

Many thanks to Ava Lon for translating this article from Gazeta.pl:

Cousin of the murdered Pole: ‘He fought for his life. The police confirmed it to me’

In Berlin a Polish truck plowed into a Christmas fair, killing twelve people. The driver of the vehicle was killed as well. He was probably murdered a few hours before the attack. Police said he did not give up, but fought back.

Shortly after 8pm on Monday a truck drove into a Christmas fair in Berlin on the Breitscheidplatz. The vehicle belonged to a Polish company, but the company’s driver had been killed and the vehicle hijacked. Police are still looking for the perpetrators. Officers interviewed, among others, Ariel Żurawski, the owner of the transport company where the Pole worked, and who was his cousin.

“Based on his injuries you can tell, and the police confirmed it, that he fought back,” Żurawski told reporters. The man saw only a photo of his cousin’s face, but on this basis he could assess the brutality of the attack — a knife wound, bruises, a swollen eye. He did not see gunshot wounds, which were reported by some media.

According to Żurawski, his cousin must have been attacked by several people. The man was 180 cm tall and weighed approx. 120 kilograms. “One person wouldn’t be able to subdue him,” he said in an interview with reporters.

“He was really a very good man,” argued Żurawski. He added that when he saw strange truck movements on the GPS, he immediately guessed that something was wrong. “He [the victim] had the nickname ‘Inspector’ in the company, because he followed all the rules closely,” the man said. The fact that he had left the unloading area was totally out of character.

“They call me a terrorist”

Żurawski also mentioned people’s reactions to the news that his truck was used in the attack. As he already told the police, since the incident he has been getting text messages with threats and malicious comments on the official website of the company on Facebook.

“They call me a terrorist. It’s sick,” he complained, and insisted that his truck was in the wrong place at the wrong time.