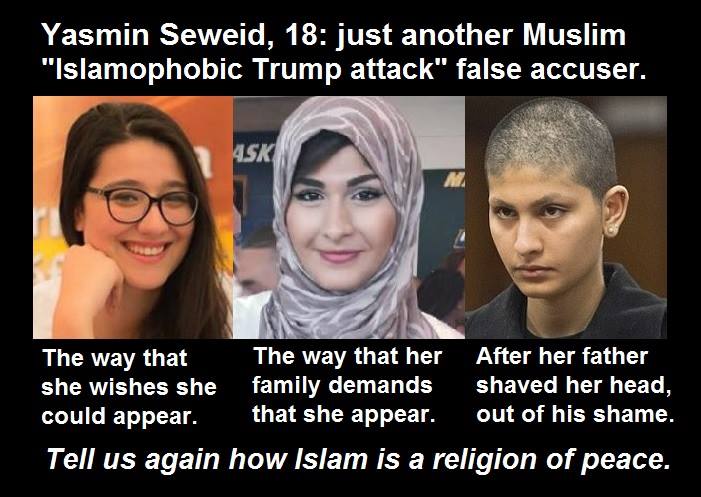 To paraphrase a sentence in the coverage of the case by The New York Daily News: Yasmin Seweid joins a growing list of local and national alleged hate-crime victims who made up incidents of “Islamophobia” out of whole cloth.

For those who are not familiar with what happened, this Daily News article from a few days ago will fill in the facts, despite the paper’s obvious ideological bias. Ms. Seweid’s story is actually quite sad:

A Muslim student who said she was harassed on the subway by drunken, hate-spewing white men shouting “Donald Trump!” lied to police because she broke her curfew, law enforcement sources said Wednesday.

Yasmin Seweid, 18, joined a growing list of local and national alleged hate-crime victims when she told cops she was taunted Dec. 1 on the No. 6 train by three men who called her a terrorist and tried to snatch her hijab off her head while straphangers did nothing.

But Seweid finally broke down Wednesday and was arrested after she admitted to detectives that it was all a big lie.

“Nothing happened, and there was no victim,” a police source said.

Police sources say Seweid made up the story because she didn’t want to get in trouble for breaking her curfew after being out late drinking with friends.

Her strict, Muslim parents allegedly forced Seweid to shave her head over the incident and were upset that she was dating a Christian, sources said.

The bareheaded Baruch College student, not wearing her hijab, was charged with filing a false report and released after her arraignment early Thursday in Manhattan Criminal Court. A relative covered Seweid’s face with a black down jacket as she was escorted into a waiting SUV following her brief court appearance.

She faces up to a year in jail for each charge.

33 thoughts on “Matt Bracken: The Three Faces of Yasmin Seweid”