The following article describes the discovery of five African migrants concealed in a very small compartment in a truck traveling from Germany to Belgium.

Many thanks to Egri Nök for translating this article from DerWesten.de:

They were packed together in a tiny storage compartment:
Customs officers free five people from truck.

Aachen. Customs officials released five people from the storage compartment of a truck on Thursday morning. The truck had just passed the Belgian-German border at the former checkpoint Aachen-Lichtenbusch, when the driver stopped for a rest at the motorway station Königsberg. When he suddenly heard knocking sounds from a storage compartment, he hailed a toll patrol that was just driving by. The officers looked into the compartment and discovered five Africans who were huddled up in the small space.

This is how little space there was: 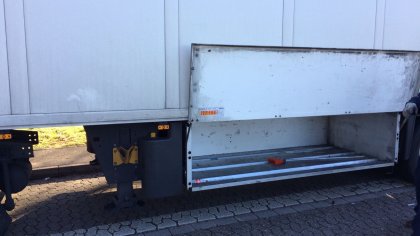 Federal Police who were called to the scene took care of the persons. They were slightly hypothermic and were then examined and treated by paramedics.

Further investigations by the Federal Police will determine whether the truck driver had anything to do with the smuggling.

A first evaluation of the fingerprints of two of the smuggled persons revealed that they are registered asylum seekers in France.