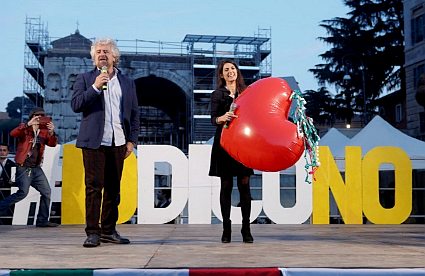 Populism is breaking out all over the place. First there was Brexit. Next came the election of Donald Trump. And most recently was the constitutional referendum in Italy, where Prime Minister Renzi and the entire political establishment were repudiated by the voters, clearing the way for a possible government headed by Beppe Grillo of the Five Star Movement.

Before the Brexit, the new popular movements were ridiculed by the establishment. Populists were regarded as buffoons and clowns, worthy only of derision. After their frightening electoral successes, however — and with the likelihood of several more in Europe over the next few months — the bien-pensants were forced to change their tune. Populists are now considered deluded but dangerous — sinister, ignorant power-hungry people with neo-Nazi tendencies. The latest refinement to the Narrative is to see them — not just Trump, but all “populists” — as tools of the Russians, manipulated by their puppet-master Vladimir Putin.

For those who have governed for so long that they have forgotten that matters were ever otherwise, the current wave of populism is further evidence that the lumpenproletariat are incapable of managing their own affairs. They are ignorant fools who chase after the latest shiny bauble dangled in front of them, with no thought for the long-term consequences. Overthrowing the well-educated all-knowing managerial class is thus seen as an act of terminal stupidity.

The following op-ed was written from an elite anti-populist point of view. Many thanks to JLH for translating this piece from Der Spiegel:

Can a chancellor-candidate be expected to have graduated from secondary school? Apparently not. Everything that supports a hierarchical distinction or power imbalance seems to be suspicious today.

My friend and colleague Gabor Steingart of the Handelsblatt, posed the question a few days ago about whether one could expect a candidate for chancellor to have the Abitur. What occasioned this question was the shift of Martin Schulz to Berlin, which was hailed in the German press like a message of salvation. Schulz does not have the Abitur. Unlike Gerhard Schröder, he never attempted to make up for having been dropped from Gymnasium because of poor academic performance.

By and large, readers approve of what Steingart writes. In this case, he was sharply rejected. “I am very often of your opinion, Mr. Steingart, but this is unworthy bashing,” was a typical comment. “Martin Schulz managed to make a career for himself without the Abitur, but with many foreign languages.” There is even a hashtag: #dünkelsteingart (arrogant steingart).

We Live in a Post-Elitist Age

Can a chancellor be expected to have the Abitur? Regarded historically, the question answers itself. So far, anyone who achieved leadership of the federal government could claim not only finishing secondary education, but (except for Willy Brandt) a university degree. Steingart would say: Anyone who seeks the highest position in Germany needs an equally high qualification. It is not enough to have a talent for speaking or a knowledge of foreign languages. This opinion, however, is no longer universally shared.

We are not only living in a post-factual era, but in a post-elitist one. Everything that supports hierarchical distinction and power imbalance appears suspicious, beginning with the insistence on educational credentials. I will not deal here with the question of whether Schulz would be a suitable candidate for chancellor. But I do find it noteworthy what reactions are called forth by a question whose answer not too long ago would have been seen as self-evident.

Criticism of the elite finds its most radical expression in the new anti-establishment movements, which are in the process of turning Europe inside out. If anything unites the left and right populists, it is the struggle against “those people up there,” meaning alternately politicians, economic bosses or the media. How far it is possible to get with aggressive populism may be seen in Italy, where Beppe Grillo with his Five Stars — after occupying the city hall in Rome — is now not so far from taking the Palazzo Chigi — the official seat of the prime minister.

Pallbearers in the Government

In Germany, Grillo is seen as a kind of joker who hears what the people are saying. In reality, he is the Italian horror-clown version of Trumpism. On the morning of Trump’s electoral victory, he appeared in front of a TV set where the newly elected president was just then giving his victory speech. The elite is “dead,” Grillo shouted, the media and the intellectuals could just bug off. Anyone who came of age in the ‘70s knows that tone. Then, also, the system was carried to the grave with much ado. The difference today is that no one would have guessed that the government would provide the pallbearers.

Some may find it an exaggeration to place aversion to the Abitur question on a par with Beppe Grillo. But there is a connection. I recently had lunch with a professor who told me that he simply could not decide, at the beginning of the semester, what he considers important in his specialty, and what is dispensable. Previously, he would have simply assumed that he knew more than his students and determined what they needed to learn. Today, this authority must be verbosely defended, because every hierarchical disparity is seen as suspect.

This runs through the professions. A head physician is expected to give everyone the feeling that he has included them in his decision-making. Ultimately, someone must say whether life-sustaining measures are to be used or not. But before it gets to that point, an ethics commission meets, in which those involved, beginning with the nurse, gather around a table to consider what should be done.

Are Children More Competent Than Adults?

“Our modern self-reflective discourses are infected with the concept that asymmetries, power discrepancies and other disparities are false,” the sociologist Irmhild Saake observes. “The sentences the physician speaks are considered too technical and cold. The ‘feminine’ intuition of the nurse gains in influence, because everyone can understand her warm, emotional sentences. Everyone is happiest when the physician suddenly speaks like a nurse and enthuses about the life energy of a patient.”

The theory goes back to Habermas[1] that claims to power in a modern society are no longer taken for granted, but in every case must be grounded in argument. But even Habermas could distinguish between competence and incompetence. It would never have occurred to him that, for instance, children should have the same communicative rank as their parents. Or even that they should be conceded greater competence, just because they basically act more sensibly than some adults.

“It is quite possible that our society would become more egalitarian and just in this way,” writes sociologist Saake about life without hierarchy. “It will certainly become more complicated.” And possibly we will also become a little stupider.