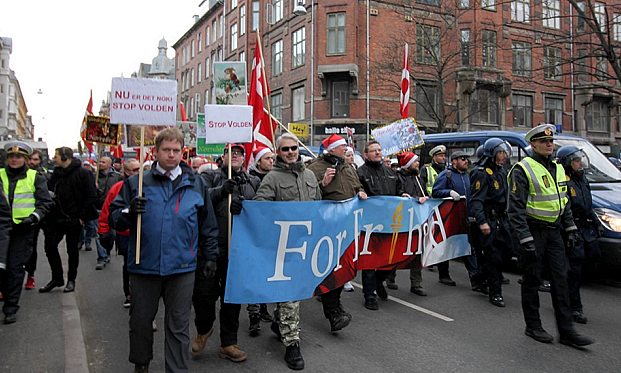 Tania Groth is the leader of For Frihed (For Freedom), the Danish chapter of PEGIDA. As reported here last month, Ms. Groth was recently threatened by “anti-fascists”, who spray-painted “We know where you live” on her front door.

Since then the lawyer for Danish PEGIDA has been attacked by the Antifas, who threw a switched-on fire extinguisher through the glass door of his office.

Last Saturday For Frihed staged a rally and march in Copenhagen. Their purpose was to bring Christmas to Nørrebro, a district west of downtown Copenhagen in which an unholy alliance of anarchists, communists, and Muslims has pretty much taken over. This year, for the first time, there were no Christmas decorations or celebrations of jul in Nørrebro.

The good folks of PEGIDA decided to bring some Christmas cheer to the bah-humbug people of Nørrebro. They scheduled a walk across the bridge into the here-be-monsters territory of the Antifas, who placed barricades and burning dumpsters in the path of the “Nazis”. Fortunately, the Danish police were accompanying the “racists” in sufficient numbers to remove the barricades and push back the foot soldiers of the anti-fascists.

For a selection of footage from last Saturday’s events, see the video from RT. Whoops, I guess that’s “fake news”, so here’s a video from For Frihed that includes the breaking of the barricades and an interview with Tania Groth (på dansk).

For more detailed footage of those peace-loving, freedom-oriented Antifas, see this video.

Below is an interview (in English) with Tania Groth about the events of December 3. Many thanks to Victor Laszlo for recording and editing this video, and to Vlad Tepes for uploading it: