The artist and essayist Maureen Mullarkey says we ought to stop any further attempts to disguise or excuse Pope Francis’ whacko declarations.

I say, given his penchant for bizarre edicts, that we heave a chamber pot in his general direction. It has become an increasingly fitting receptacle for his insane Lefter-Than-Left emanations.

Ms. Mullarkey’s recent post, written most fittingly on the Feast of the Immaculate Conception, demonstrates once more her wicked Irish pen (or keyboard) as she dismembers delineates his latest pronouncements [With my own textual emphases in bold, and comments in italics — D]. 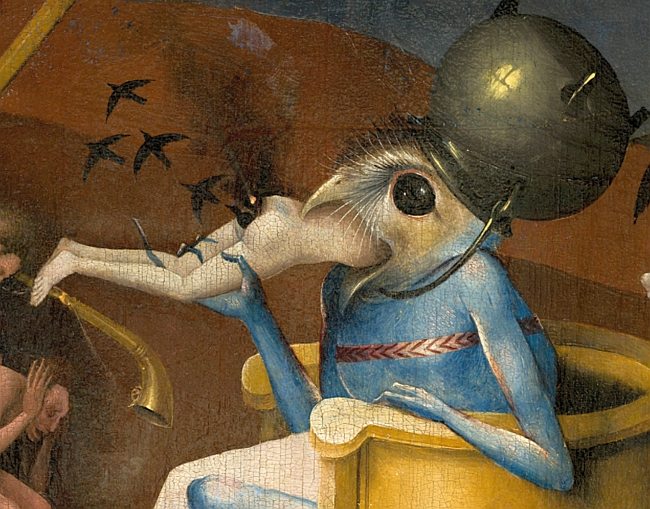 Hieronymus Bosch, detail from the right panel (Hell) of the triptych ‘The Garden of Earthly Delights’

There is a crackpot quality to this pontificate. Nothing is gained by tripping over our own tongues trying to disguise, excuse, or justify it. The Church was healthier under Alexander VI. A sinner, for sure. Yet the Borgia pope was still an impressive man in many ways. The Church would be better served by a pope who had all his wits plus a mistress on the side than an erratic, mercy-mongering pretender to virtue.

I’m sure Ms. Mullarkey well knows that this particular Pope Alexander (the sixth one) fathered Lucretia Borgia (among his many illegitimate but beloved children). Despite the sins of papal flesh, which eventually served to bring about a fragmentation and reforming of Christianity, few if any of those sinners made as many strange accusations as Frankie has. This latest stuff is Papal bull on steroids.

Public sins are easily recognized. It is the cloaked and buried ones that are dangerous. Only a clinician could say with any certainty what has sent the needle off the dial with Jorge Bergoglio. But something is seriously, audibly askew. And that something goes beyond his predisposition for left-wing causes.

Over the last week we learn that the Vatican’s updated norms for priestly formation include requiring candidates for the priesthood to study climate change and acquaint themselves with the catalogue of environmental threats. Seminarians must adopt the reigning creed: “Protecting the environment and caring for our common home — the Earth — belong fully to the Christian outlook on man and reality.” The new document, The Gift of Priestly Formation, states that priests must promote “an appropriate care for everything connected to the protection of creation.”

That insertion is a Bergoglian blot on an otherwise gracious and discerning document. Set aside for now the sentimentality of that problematic phrase “our common home.” Stay with the injunction’s muddled descent into an implicit materialism that drains Catholicism of its Christianity.

When Frankie has mercifully shuffled off this mortal coil, his materialism will be judged harshly. Papal authority lies in telling us how to mend our souls. It is never invested in leftist causes as Frankie’s is. The man is a Communist with a Cross. He is anathema to the popes who fought the self-same this-world materialism which lies at the center of ol’ Frankie’s thought.

At the level of least complexity, this new injunction displays culpable ignorance of the technological sophistication of those very energy companies under assault by environmental fundamentalists. While the Vatican is in a mood to refresh old insights, it might try its hand at Matthew 22:21. A useful update could go something like this: “Render unto Halliburton the things that are Halliburton’s; and unto God the things that are God’s.”

So many of this Pope’s shout-outs are indeed “culpably ignorant”. In other words, his lack of knowledge doesn’t let him off the hook. His hubris, much like Obama’s, prods him to speak when silence would be more salvific for all concerned. In both cases, their followers would be saved the shame of being associated with an ever more hapless “leader”.

If only this pope’s half-baked solicitude for worldly flourishing ended there. But no. Bergoglio’s pontificate is the gift that keeps on taking. What is being taken — a theft broadcast worldwide in one untethered interview after another — is the credibility of the Church’s teaching office.

What is there to say about Bergoglio’s equation of partisan journalism and disinformation with feces? At the very least, his wince-inducing references to coprophilia, a sexual deviancy, are staggeringly tone-deaf. But there is more to it than that. His natterings about mercy and tenderness jar with his instinct to denigrate conscientious opposition by casting it in psychological terms. (Remember “self-absorbed, promethean, neo-pelagians”?) This time ’round, he indulges in psycho-sexual terms that carry a perverse frisson. It is an unhealthy analogy that boomerangs attention back onto the pope himself.

Self-awareness is not this man’s strong suit.

Not long ago he made the broad-brush declaration that half of all marriages were likely invalid. Now we learn that “people have a tendency toward the sickness of coprophagia (feeding on excrement).”

How would you know, Francis? Have you stats on that? And is there a papal exemption for the disinformation anointed and enshrined in Laudato Si? The encyclical’s newly minted metrosexual Jesus and contested (not to say junk) science is . . . well, may we refer to that now, with no loss of dignity, as horse manure?

This pontificate is a cornucopia of last straws. There is derangement somewhere.

The derangement is soul-deep. More and more Catholics are turning away from this exquisitely tone-deaf Pope. Too bad the Curia don’t apply the same term-limits to his service as they did so abruptly — and unfairly — to Benedict.

Perhaps there will be a grassroots-level movement: Bring Back Benedict.

53 thoughts on “Bring Back Benedict”