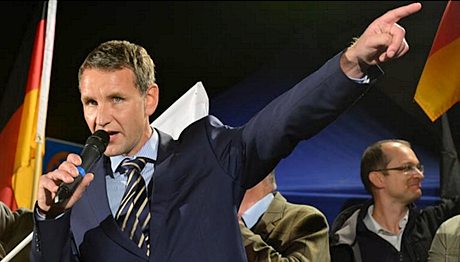 In recent years we have featured several videos of Björn Höcke, who is now an MP for the AfD (Alternative für Deutschland, Alternative for Germany). The following video is a short extract from a speech given recently by Mr. Höcke.

Oz-Rita, who translated the clip for subtitling, includes these notes:

This speech was given just after the election victory of Donald Trump, on November 12, 2016. The event, organised by the AfD, took place in Gunzenhausen in Bavaria.

Höcke is one of my favorite MPs in Germany (passionately feared, hence hated and defamed by the dark Merkel side) because he puts his energy into Klartext (clear language) and seems fearless. I see a future Chancellor in him, if they do not kill him one way or another.

In his speech he welcomes the victory of Donald Trump, defends Populism, disparages the left-right schema, condemns Political Correctness and praises patriotism.

5 thoughts on “Björn Höcke: “We Say NO to a Tolerance That Ends in Self-Abandonment””