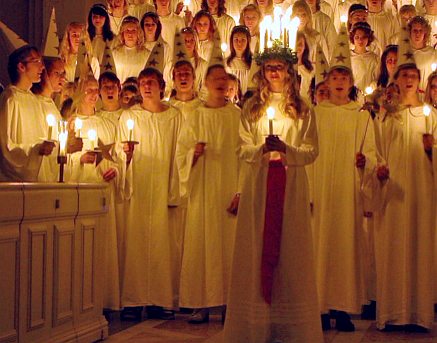 ’Tis the year’s midnight, and ’tis the day’s,
Lucie’s who scarce seven hours herself unmasks,
The Sun is spent, and now his flasks
Send forth light squibs, no constant rays;
The whole world’s sap is sunk:
The general balm th’hydroptic earth hath drunk,
Whither, as to the bed’s-feet, life is shrunk,
Dead and interred; yet all these seem to laugh,
Compared with me, who am their epitaph.

— From “A Nocturnal upon St. Lucie’s Day, Being the Shortest Day” by John Donne

Today is St. Lucy’s Day, and tonight is the night for celebrating the shortest day of the year (which it was under the Julian Calendar, when the feast day was set).

We’ve written in the past about the St. Lucy celebrations in Scandinavia, particularly Sweden, when young girls wear a rack of candles on their head and walk in a procession. As political correctness corroded Swedish culture, first a girl of color was substituted for the traditional blond-haired blue-eyed child, and then later boys wore the candles on their heads. After the latter revision was instituted, Dymphna predicted the demise of the festival of St. Lucy, and now it has indeed occurred.

Today, December 13th, is Lucia Day. All over Sweden on this day, local Lucias are being selected. Each school, each kindergarten, each city and each town and village chooses their own Lucia. These Lucias will then on December 13th sing the Lucia songs with a crown of candles on their heads. Traditionally they are accompanied by other girls also dressed in white and with a few boys, the Stjärngossar, star singers, with long white shirts and their pointed hats decorated with stars. They sing in churches, but also in Hospitals and in nursing homes. That’s how it used to be!

This December it will be unusually dark in many different towns. There will be no Lucia in Ystad, nor in Köping, Umeå, Uddevalla or Södertälje. More and more cities and communities are doing away with this tradition. Lucia is disappearing from the schools and kindergartens as well. Seven kindergartens in Stockholm alone have decided to abolish this Swedish tradition this year. At the Tantolunden preschool, the Santa Lucia celebration was replaced with a “festival of lights”. Declining interest, in connection with the fact that this celebration does not include all (new) Swedes, is the common reason stated. “The picture of Lucia almost always shows a blonde woman that symbolizes everything Swedish. Many people do not recognize themselves in this,” says Jonas Engman, an ethnologist from the Nordiska Museum.

Back in 2012 Swedes experienced a politically correct Lucia with a multicultural look that the public Swedish TV channel SVT broadcast from the cathedral in Uppsala. Moreover, an Arabic “new Swede” destroyed the celebratory mood by performing a street rap in broken Rinkeby Swedish with a text that celebrated “multiculti”. The brown “Pepperkaksgubbar”, gingerbread boys, and the Stjärngossarna, star singers, were forbidden due to consideration for Muslim kids (and parents).

This year an advertising campaign for the Swedish department store Åhléns, which chose an African boy for the role of Lucia (was USED for the role of Lucia), caused quite a stir. Especially in and through social media, the campaign brought huge media attention. After criticism (racist hate on the net) by outraged citizens, who complained about the trampling of Swedish traditions, there was an even bigger multiculti indignation about these “racists”. And if that wasn’t enough, it is now assumed that the department store organized this as a public relations campaign together with the left Facebook group #jagärhär that operates against hate on the net (!), in order to provoke hate mail. The Facebook group is said to have written quite a few of these hate emails themselves.

One can only hope then that there are enough Swedes who will soon see the Lucia (light). All the while as the Lucia festival is also being celebrated from Copenhagen to Toronto and even in lefty Hamburg, many confused Swedes are asking themselves these days if Lucia is an African boy and if the Prophet Mohammed is a homosexual woman.

This is the original Swedish article about the cancellations of the festival.

This is a Swedish report about the Facebook group #jagärhär and their self produced racist hate mail.

These are the Lucia festivals that are taking place anywhere else but in Sweden.

As an epilogue, I’ll quote the words of Riddley Walker (from the eponymous novel by Russell Hoban), when he saw the “shyning of them broakin machines” at Fork Stoan:

3 thoughts on “A Nocturnal upon St. Lucy’s Day”