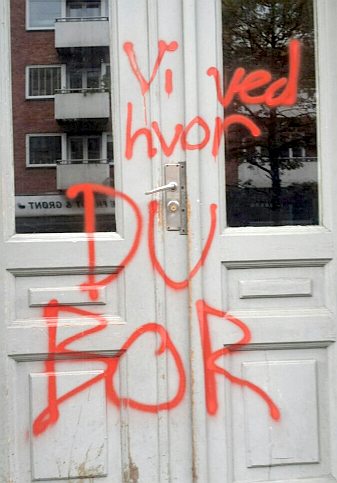 Message on Tania Groth’s door: ‘We know where you live’

This is standard operating procedure for the Multiculti Left, whether in Denmark or anywhere else. As Vlad Tepes reported this morning:

“WE KNOW WHERE YOU LIVE” Threat painted on door of Tania Groth, leader of PEGIDA Denmark

Once again, what is likely the far left, exposes not just sympathy for terrorists and terrorist ideology, but actually deploys it.

I hope the police take this as seriously as when a regular law abiding Dane says something true but uncomplimentary about Islam.

PEGIDA Denmark, also known as For Freedom, is having a demo against sharia and the islamization of Denmark and for freedom of speech on Saturday, Nov. 5 (this coming Saturday).

I hope all of you who read this and can join will do so for the causes listed, and support Tania who is being threatened and intimidated for supporting classically liberal values and real individual women’s rights.