WARNING: If you touch the wrong box on the screen, you’ll get an electric shock. Just remember to vote for the candidates the TV told you to, and you’ll be fine.

From the Baron: We just came back from voting. The volunteers at the registration table (people we know) told us that turnout has been heavy.

But here’s the strange part: after we’d shown our ID, and got the little cards, and waited in line, they handed each of us a ballot paper, the (relatively) old-fashioned kind where you have to fill in the little ovals with a black pen. They kept the touch-screen machines in place so people could use the privacy barriers. But the screens were turned off, and we had to mark the ballot using the glass surface as our table.

After that we stood in another line for the ballot scanner, which sucked in our ballots and scanned them. The man monitoring the machine (also someone we know) told us that our votes had already been counted. He gave us our little “I VOTED” stickers, and we left.

Our district has a paper trail that can be recounted.

Those voting machines were a major, expensive upgrade, and we’ve only had them for a few years. We used them in the primary last spring. I asked one of the people why they changed over, and she said she didn’t know.

I wonder if there were enough Trump supporters on the Board of Supervisors to force the county to sideline the machines? I’ve read that some counties in Texas have done that, but I had no idea that the same thing was happening here in Virginia. It gives me hope for the Old Dominion.

Mind you, I imagine they’re still using the machines up there in Loudoun, Fairfax, Arlington, Alexandria, and other fusty locales in the Wretched Hive of Scum and Villainy.

We Came, We Voted, and now…We Wait. (a paraphrase of Hillary’s brutal statement about Ghaddaffi, here):

When you add in Alaska and Hawaii, America covers seven time zones. Oh, and Arizona has its own time zone.

In other words, the counting will take a looong time. 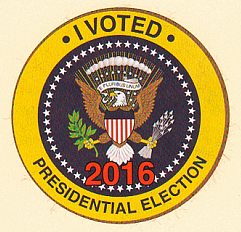 However, given the relatively small number of electoral college votes spread between the two non-continental states, we’ll know the vote by midnight, Pacific Time. That’s 3:00 AM back here in the Eastern time zone. To complicate things further, there are several “swing states” whose outcomes often parallel the outcome of the whole megillah. One is Ohio, and another is Florida. In the Bush vs. Gore election, the Supreme Court had to decide who was the winner. They came out in favor of Bush, much to the disgust of the Democrats.

This is a pivotal election. No matter who wins, the Aftermath will be full of sound and fury, signifying our political and economic future for at least the next decade.

If Hillary takes it then we will be the New Europe, socialist and on a downward trajectory, but the consequences for our national debt will be staved off for a bit longer.

If Trump takes it, who knows? Our financial house is so jury-rigged that the Powers That Be, who have kept the whole thing afloat for Obama, may well decide to bring the whole edifice down around Trump.

May the better man win.

25 thoughts on “Vote Until Your Fingers Bleed”