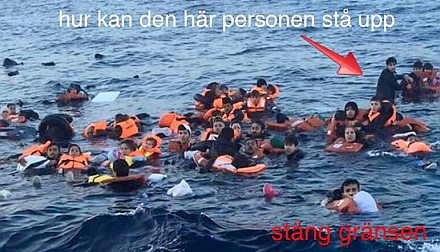 Translation: “How come this person is able to stand up?”, “Close the border!”

The following overview of the “refugee” crisis from Hungary describes the leftist lunacy that has prevailed in Europe for the past two years.

Many thanks to CrossWare for this translation from the Hungarian portal 888.hu:

The Left’s naïve view of humanity

On the Left they think anybody who is running away from misery can only be a good person. Both the Italian and Hungarian police were accused of brutality based on the statements of migrants, without any shred of objective evidence. This sentimental and naïve attitude impedes the ability to view the issue of migration with the necessary objectivity and measure its dangers and possibilities.

Migration already provided multiple challenges to the institutions and laws of the EU. One of them — now turning into parody — is migrants who identify themselves as minors to get better treatment. The bureaucrats of the EU believe — without batting an eyelid — the fairy tale of migrants well into their 20s that they are children. They are then placed in families who are shocked by the adult behaviour of “teenaged” migrants. In one case from England that has already traveled the world via the press, the migrant called the Christians naïve idiots, and said how easy was to fool them. The legal system of the EU and its naive approach to migrants is unable to deal with this kind of fraud. There is no fully objective system to establish age before a court, and the migrants can easily capitalize on this, while they think we are complete morons.

Migrants have already shown signs of their manipulative abilities many times. During the battle of Röszke [when migrants tried to break through the border of Hungary from Serbia — translator] some of the videos showed a girl who deliberately let herself be sprayed with tear gas and then allowed photos of her to be taken for the media. In another case, which became a scandal in Austria, when a migrant tossed his family in Bicske onto the tracks, they cut the footage in such way that insinuated that the police had done it, while in reality they had tried to help the woman and the kid.

At the Keleti train station I personally witnessed a migrant who forced his kid to kneel behind a “We want to go to Germany” sign so the international media could take more heartbreaking photos. We must mention that many so-called “war photos” are also staged to serve the international Leftist propaganda machine.

The most visible migrant manipulation was of course that “Everybody is Syrian”. After Merkel’s disastrous invitation all migrants suddenly become Syrian, placing German police officers into impossible situations.

Police officers who deal with migrants are in an incredibly hard situation. When the migrants wanted to break into the country at Röszke, Hungarian police officers were instructed not to use violence in any case, even when they were directly assaulted. I was a witness as the migrants rudely buffeted them, throwing water bottles at them, but they could not do anything, which was shocking to watch. For a fraction of what the migrants did there, the police would have beat the crap out of any native citizen if they were to this in another demonstration.

The main task of the police is to protect the migrants from each other. They commit far more violent crimes against one another than against anybody else. Murders, continual fights, and rapes. Probably more officers have been injured in these situations than in anything else. But the Left always acquit the migrants of these crimes. It is natural that they beat, kill and rape one another, because this is the effect of shock and the long affliction they have suffered.

The idiocy of Left goes so far that even rape is treated with forgiveness. They explain Swedish rape statistics by citing cultural differences, long deprivation without the company of a woman, partially exonerating the perpetrators. The migrant who raped a little boy was excused for having a “cultural misunderstanding”. The parent who threw his own kids out of the window was “only desperate”, in their view.

The European Left watching the migrants with a idiotic naivety. They want the whole wide world to look at them through these distorting pink glasses. By their doctrines, anybody who escapes from misery or goes through suffering can only be a good person, who always tells the truth and must be believed by everybody at all times. Their statements cannot be questioned, nor their truthfulness ever checked, because that would be add humiliation to their suffering. If it turns out that the opposite is true, that is the result of the shock of brutality they suffered by at our hands. This sentimental and imbecilic view of people fits perfectly into the Leftist worldview. This view made it possible, due to a lack of controls, to have a large number of terrorists sneak into the continent, and as a result many people have already died [and will die soon — translator].

The Left look at Europeans with a completely different set of glasses. In my opinion every single European country — including the ones that refuse to accept migrants — made superhuman efforts over the last year and a half to solve the problems of the thousands who flooded here, provided for their needs, financed the cost of their support, and made efforts to maintain law and order and defend their own citizens. These are complex tasks, but it does not impress the Leftist communication machine. Countries, persons and organizations suffer from nefarious attacks by these Leftist circles. Most painfully in their crosshairs are the police officers who are at the borders and other places working under very difficult conditions under continuous harassment. They cannot make mistakes, can’t lose their patience, because the Left immediately paints them with the brush of brutality. In the meantime the migrants can lie and cheat, but still remain the victims of the situation. A good portion of the migrants abuse this naivety and milk it to get more freebies. If the activist from Amnesty International wants to hear that police were brutal with them, he will; if he wants to hear how they left everything behind [except lots of money, bank cards, designer clothing and smart phones — translator], then that is what he will hear. If they have to become Syrian, they will, and when someone is looking for children they all become minors.

Europe could spare itself a lot of trouble if it would understand that migrants are people, too, and they are a mixture of good ones and bad ones. Their words should be received with the same scepticism aimed at any other stories coming from witnesses. The word of a migrant and that of a police officer are equal in the eyes of the law. However, if a hundred migrants state that police have been beating them, but are unable to provide any proof, then it should not stand in front of the law.

Let’s forget the Leftists’ (useful idiots) naivety because it is extremely dangerous and delays the solution for the problem. Also it is incredibly unfair to those who are serving at the borders and migrant camps, who try to protect their citizens, and even the migrants from each other.

Obviously all claims of unlawful or unfair treatment must be examined and investigated, and if any are true, then we must act on the facts. But there is no point in blackmailing society with made-up stories from the migrants, and especially not police officers.

21 thoughts on “The Left’s Naïve View of Humanity”