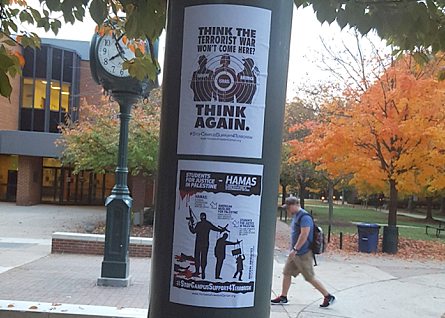 For many years Dymphna and I have been fans of Oleg Atbashian and The People’s Cube. The satirical art and articles at the TPC are brilliant and hysterically funny. Nobody does better graphics than The People’s Cube.

A few days ago Mr. Atbashian was arrested at George Mason University and charged with destruction of property, a Class 6 felony. His crime? Putting up posters and stickers opposing Hamas and the terrorist-friendly campus groups that support Hamas. The charges against him and a colleague kept them both in a Fairfax County jail cell until they could raise the $8,000 bail. If convicted, they may face five years in prison.

Such is life in Obama’s America. With Trump’s America coming up in January, will anything change? Will the charges against Oleg Atbashian be dropped? This is a local rather than a federal charge, so it’s hard to say.

By the way: I’m willing to bet that pro-Hamas activists on campus could have used any kind of glue they wanted to put up their anti-Zionist posters, without fear of being arrested and charged.

Many thanks to Victor Laszlo for recording and editing this video, and to Vlad Tepes for uploading it:

You can read more about what happened to Oleg Atbashian in Daniel Greenfield’s column at FrontPage Mag.