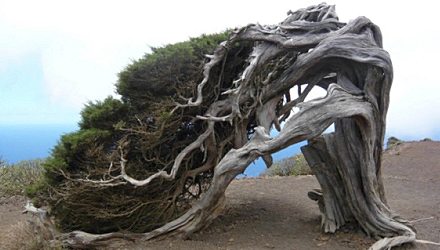 For a change from all the election news, JLH has translated a German article about the incompetence and profligacy of the EU bureaucracy, the blinkered ideology of the Greens, and a tiny island in the Canaries. The translator includes this note:

You’ve heard of the canary in the coal mine. This is the Canary in the Atlantic, and it has something to tell us about massive bureaucracies and green dreams.

You don’t know El Hierro? Small wonder. The second-smallest of the Canary Islands cannot be reached nonstop from the continent. It offers little for most tourists. No beaches. No really spectacular landscapes. Their cuisine consists mostly of the usual Canary fish on wrinkly potato, garnished with red and green mojo sauce.[1] No question, Hierro is splendid. If you like rugged, out-of-the-way places.

It is mostly serious travelers and divers that are drawn to this island, jokingly called by the 6,000 or 7,000 permanent residents “el cull del archipelago” — the arse of the archipelago. Jobs are rare. Industries non-existent. What goods make it to the island are mostly leftovers from Tenerife and Gran Canary. It is no secret that Hierro is not exactly a nest of go-getters. Anybody who knows which end is up leaves el cull and makes money on the large neighboring islands or the Spanish mainland.

Hierro is so backward that it sometimes flabbergasts even foreigners who have lived here for a long time. Women will not even take male acquaintances into their cars, if they see them on a lonesome country road — there could be talk. Visitors entering a property clap loudly, so that neighbors will notice them and know that the new arrivals do not intend to sneak up on strange women. This is not folklore — it is taken damned seriously.

Political Conditions Are Byzantine, If Not Erdoganic

The political conditions are byzantine, if not erdoganic. Anyone who hopes for orders or (as a creative artist or media representative) appropriations, must get on the right side of the matadors in the island administration, and praise them mightily. Critics of the cabildo[2] are closed out and stricken from the patronage list. Most Herreños consider criticism in and of itself to be inappropriate, which corresponds with a widespread social inhibition. An island saying is: A shut mouth gathers no flies.

And then, of course, the Civil War. Still firmly in the minds of many islanders even after 80 years. There were more than a few crimes and persecutions on little Hierro. The island was very Franco-affinitive. Whoever intends to investigate such cases must dress warmly.

Hierro leads, however, in one particular. More EU grant money per capita has been sunk into this island than into any other region. Just the outsize pier in La Estaca harbor swallowed up €20 million of the regional allowance. The pier is palpably unnecessary. Large ferries and giant cruise ships don’t come to Hierro. Why should they?

Also fabulously constructed (naturally with EU sponsorship) and kept in prime condition is the road network that reaches the distant mountainous regions. Serpentine driving on Hierro is really fun, since it is rare elsewhere. Other big projects, too, are distinguished by high cost in combination with complete mindlessness. For instance, a “conference center” at the cold and damp elevation of 900 meters, where unfortunately, as good as no conferences take place. For years, a saltwater swimming pool lay idle and unused.

Hierro is the Insanity of Subsidy Politics in a Nutshell

Certainly other regions are not backward in burning up European taxpayer money for risible “infrastructure projects” — note the millions gobbled up by the barely used two-track bike paths on the very windy isle of Fuertaventura. But on Hierro, the insanity of subsidy politics can be seen in a nutshell.

It goes like this. A local bigwig, who may be invested in an asphalt-producing firm which is majority owned by a relative, initiates, for example, a proposal for co-financing of wide, race track-viable roads in a deserted area, where only ATVs might find some use. In distant Brussels, the threadbare proposal is mindlessly waved through. The asphalt firm is grateful.

A few years ago Hierro made headlines with a project whose audacity at its highest seemed to rival that of Columbus, when he set out from Hierro in 1493, on his second voyage of exploration to the New World. The arse of the archipelago wanted to become the first island to be “energy independent.” See, the wind often sweeps powerfully over the mountaintops! A landmark of Hierro, near the Ermita de los Reyes, is a very photogenic juniper tree pressed down by the wind. What could be more natural than to “harvest” the wind?

In the future, five wind turbines on the top of a dormant volcano were to take over production of electricity from the old diesel power plant. Surplus electricity was to be used to bring water into a hydro pumping storage power station also built on the volcano. The hope was that this would bridge the doldrums which constantly occur in the middle of the Atlantic.

The project briefly named “Gorona”, up to 60% owned by the island administration, was put together with components from Germany, France, Italy and Switzerland. Cost — €85 million. Small change, if you consider that Hierro would practically serve as a global “energy testimonial.”

The shutdown of the smelly power plant would mean a yearly drop of 18,700 tons of CO2, 100 tons of sulfur oxide and 400 tons of nitrous oxide. Generation of power by wind and water would be 23% better than before; the price of electricity would probably drop. TV weisenheimers did not want to take a backseat to those and similar songs of praise, whose authors had apparently switched off their thought processes. “El Hierro, visionaries at the end of the world” was the title of a euphoric feature by Arte in 2015, which was to boomerang immediately.

After the first year of operation, the good news was that the dream of sustainably taking care of 100% of the island power needs had been fulfilled. “Highest expectations exceeded” exulted the firm, Gorona. The bad news: The 100% had only been achieved on a single day in 2015 — for all of 2 hours. During the first half of the year, “clean” energy contributed only 30% to energy production. In later months, between 49 and 55 percent.

A Pump Storage Pool Too Small by a Factor of 200

The announcements of success were all from the operating company. The blog ruhrkultour.de ridiculed the “bitter end of an energy fairy tale,” noting that the company was distinguished by its “creativity” in the interpretation of facts. More than a few islanders — including a large number of Germans residing on the island — seriously doubt that the statements of the windy company bear any resemblance to reality.

While the faithful, dirty old diesel hammered away down at the harbor — perforce without halt, to keep the net stable — the brouhaha was enormous. It slowly became clear that — all the whitewashing and self-deception notwithstanding — the cardinal error of this frivolous affair was to set up five butt-ugly wind turbines and a basin full of water smack in the middle of a UNESCO biosphere reservation.

This 150,000 meter square basin that was to provide hydroelectric power when the wind failed, would have had to be — according to recent calculations — at least five times, if not twenty times, as large, in order to be able to bridge the windless doldrums. In an updated entry on Hierro, Wikipedia even writes that a 200 times larger water storage would be needed for independent energy production.

As always, pools of such dimensions are not only enormously expensive, but very dangerous in earthquake-prone regions. There were catastrophic results from a burst mega-storage unit on La Palma in 2011. After a costly repair, the storage basin of Barlovento was cautiously filled only halfway — a flop in any business management manual.

So what can the battered Herreños learn from this? Project Independence in the gutter, money kaput, trophy for advancement rusted out. Forget the imagined delegations from other islands that would have been able to see on Hierro what the future of energy looks like. And no more wet-behind-the-ears reporters from Germany. No TV teams with hard-wired eco-agendas.

And no more talk of the laughable, almost merkelesque plan for all island autos by 2020 to be replaced by electromobiles, and thus (as the NZZ enthused) rise to become the “first emission-free spot in the world.” The sudden energy wealth of the poor people of Hierro is like other visions which once caused Helmut Schmidt to suggest that their visionaries should seek medical help.

What could Hierro do to tone down the uproar? Use what the island already has! The above-mentioned conference center could become a “competence center,” offering year-round specialist seminars. For responsible officials from the Brussels bureaucracy, for instance, money-saving regional aid programs. Or for politicians who want to study on location what comes of an “energy revolution.” Or for journalists who could learn on harshly beautiful Hierro how to research without preconceptions about the EU and energy revolutions.

15 thoughts on “The Insanity of Subsidy Politics in a Nutshell”