Well, tomorrow is the big day.

Wednesday won’t bring an end to the current ugliness, but it will morph into a different kind of ugliness — litigation, counter-litigation, demonstrations, maybe massive street violence à la BLM — who knows?

My take on the situation is this: If there were no electoral fraud whatsoever, Donald Trump would win by a wide margin. I don’t believe the polls — they are being manipulated by the media and the pollsters themselves, who are mostly servants of the Powers That Be. In any case, as I’ve pointed out before, people have ample motivation to lie to pollsters in this election, just as Britons did last June concerning Brexit.

But there will be substantial fraud. A record number of illegal aliens will vote, in addition to the more traditional armies of the dead and the winos handed “walking-around money” to vote in multiple precincts. The newest and most unpredictable factor is the rigging of voting machines. Those wonderful electronic devices were brought in under heavy media and liberal pressure after the “hanging chads” crisis in Florida in 2000. But it was obvious to a cynical old computer programmer like myself that the eventual fraudulent misuse of those machines was all but guaranteed. I’d wager that when you need an extra 100,000 votes, it costs a lot less to suborn a programmer or a computer engineer than it does to pay off 20,000 winos or Mexicans.

So my bet is that Hillary will “win”, but by a slim margin. Then Donald Trump will litigate it, but you can’t do recounts with electronic voting, as far as I know. Mr. Trump’s lawyers will have to track down some of those crooked programmers and pay them more than the Democrats did, if they want the true story to come out. And they won’t be able to count on the help of the Republican Party, since the Republican establishment actually wants its candidate to lose.

Alternatively, if Mr. Trump manages to squeak by, expect the Democrats to litigate the result, big time. And think of all those Obama-appointed judges whose posteriors now warm the benches of the federal courts all across this fair land of ours…

Yes, it’s going to be ugly for many months to come. After the election, and especially after the Empress assumes the throne in January, there will be a rearguard action to impeach Hillary for some of her multiple felonies. In striking back against its opponents, the new Imperial Court will make the Obama administration look like a model of self-restraint.

Then, eventually, if we’re lucky, we can look forward to this: 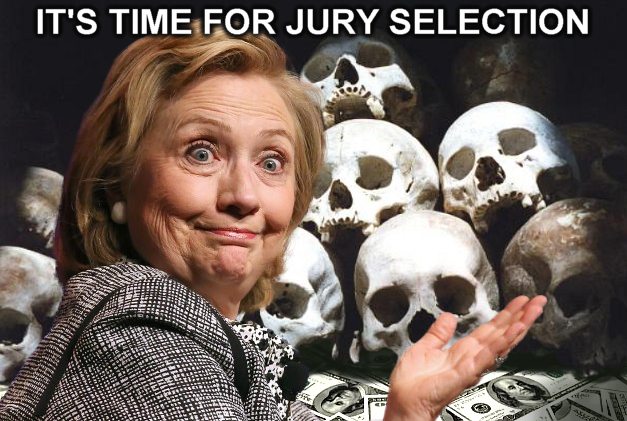 35 thoughts on “The Fat Lady is Clearing Her Throat…”