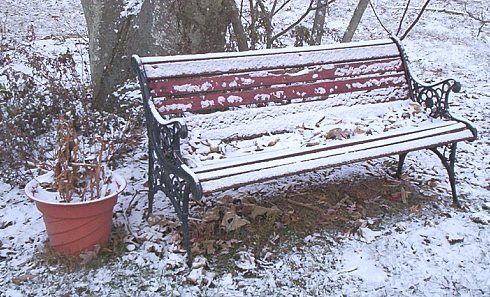 This post is a confluence between Thanksgiving Day and the wrap-up of our Autumn Fundraiser.

The red bench in the photo above has now been dusted with snow — an adumbration of things to come, since our next fundraiser will be Winter 2017, sometime in the frigid days after the beginning of the new year.

We have a lot to be thankful for at the moment. Perhaps the single biggest cause for gratitude is that we won’t have eight years of President Hillary (or more likely, a year or so of the Empress, followed by ten years of Kommie Kaine) to look forward to. I also thank the Lord for the soon-to-be-realized opportunity to use the phrase “former President Obama”. What a pleasure that will be! It was a long eight years, but we made it.

And our just-completed bleg gives us ample additional reason to be thankful: despite the fact that Dymphna’s travails kept us from doing a fresh post every day, donors showed up with heartening regularity. It seems that the compact format of this fundraiser didn’t inhibit donations all that much, if at all.

So thank you all for showing up. And thank you also for contributing to the comments — that was another unexpected side effect of the unitary fundraiser: a far larger response than usual in the comments.

Below is the final list of places from which donations came (giving me the opportunity to show off my new software for breaking out Australian states and Canadian provinces).

Update Nov. 25 1:30pm: Alaska just sent in a gift, thereby adding another state to the list:

The most apt description of the kind of fundraising we do here came up in the comments on a different post, a translated op-ed from Switzerland about the recent American presidential election. The comment in question was a response to another commenter named scherado, who had been addressing the author of the op-ed, Markus Somm:

Mr Somm, I appreciate your perspective.

I, the non-journalist, perceive that government by the people — parliamentary, constitutional, representative republic, and so on— can NOT function properly WITHOUT a proper press. You have stated very well the illness.

Will someone suggest the remedy, any remedy?

Our Israeli correspondent MC weighed in with a reply:

The real problem is funding. Professional writers need to eat, and the money is only there for those who write what the ‘money men’ want to hear.

The remedy is to ensure that writers of truths don’t starve. This blog is ‘crowd funded’ and can therefore write truth. If it was sponsored, then it would have to write what the sponsors want.

The answer is that we of liberal conservative values must be prepared to donate to the alternative media wherever we find it.

The opposition is rich and powerful because the elites make sure that it is well funded. It is the way that their voice, and only their voice, is heard.

If I wrote as a shill for Soros I would be a very unhappy but well-fed person. As it is, most of my time is spent writing and repairing 40-year-old software, so my literary output is limited by the need not to starve. There is no money in writing for the ‘right’; it has to be a labour of love.

There is a remedy, but it means all of us taking an action, or better still: a monthly subscription…

MC has described the problem (and a possible solution) in a nutshell. Writers who receive most of their funding from a single source, whether salary or otherwise, are beholden to their paymasters. As long as they stay within the fence of their corral, they may write what they please. But if they venture outside it, they may shortly find themselves looking for other employment — in a job market that has now identified them as “mavericks”, and therefore risky to hire.

This is true not just of writers for the mainstream media, but also of those employed by foundations or other non-profits. The enforcement of group-think became glaringly obvious during the furor over Diana West’s book American Betrayal. Conservative think tanks and foundations cracked down hard on anyone who agreed with Ms. West’s thesis, or even failed to condemn her vigorously enough. Their enforcement of the party line was every bit as thorough and ruthless as anything you might find in the MSM. The whole fiasco illuminated an ugly aspect of alleged conservatism in America: in its own way, it is just as much a part of the establishment as CBS or the New York Times. Anyone who dares to expose the extent of Communist infiltration of the Roosevelt administration or otherwise tarnishes the halo of Saint FDR will be perp-walked into the outer darkness as fast as the bouncers can strong-arm him off the stage.

That’s the risk of being funded by a major non-profit. You are not free to write whatever you want, not if you want to continue receiving your paycheck.

The business model — if you can call it that — of what we do here is the only other alternative. Independent crowdfunded blogs and websites enjoy true creative freedom. It may force them to live on the edge of penury, but boy! — it sure is nice to have that kind of freedom.

There is a minimum level of traffic required for a blog to be able to manage it. I’m not sure what that level is, but Gates of Vienna seems to stay just barely over it. These are lean times for us, but we have managed to keep going for quite a few years now.

If every visitor to our blog were to donate a dollar a month, we could live in what would seem like fabulous luxury compared to our current modest lifestyle. However, most of our traffic probably comes from bots and chance Google searches — including those earnest folk who want to learn more about “how to make a bomb jihad” — and there are undoubtedly many casual visitors who just pop in from time to time to see what’s going on.

The crowd that actually funds us is much smaller, but also much more dedicated. They respond to our fundraising appeals with a generosity that never fails to amaze me. And their numbers are slowly growing, especially since the “refugee” crisis in Europe first began to appear in MSM headlines and the network news.

We could increase our income further by hosting real ads — the ugly kind that flash and blare at you from the header or the sidebar, showing you garish images that you don’t want to see and telling you things you don’t want to hear. Dymphna and I hate those. After consulting with our readers, we made an executive decision not to accept any.

All we have are those Amazon book covers we put up on the sidebar for our friends. If you click through and buy something, we get a few pennies from Amazon. It’s a modest but welcome addition to our income.

So — if you were planning on purchasing the complete works of Charles Dickens bound in calfskin and gold leaf, please consider entering Amazon through the links on our sidebar…

10 thoughts on “Thanks for Mercies Past Received”